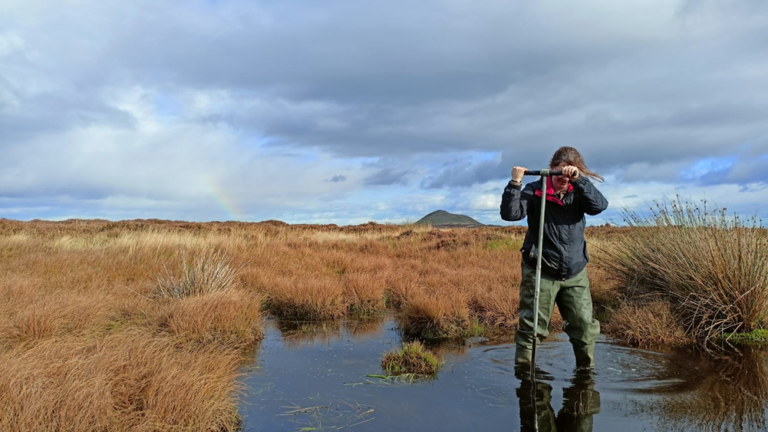 Environmental ancient DNA holds great potential for reconstructing past biodiversity and palaeo-ecosystems (Parducci 2019). This is achieved by extracting and analysing floral and/or faunal DNA preserved in different environmental soils and sediments, including naturally accumulated peat and lake sediments (Giguet-Covex et al. 2014, Parducci 2019), cave sediments and stalagmites (Slon et al. 2017, Stahlschmidt et al. 2019), and even archaeological sites and the natural environments surrounding those sites (Hebsgaard 2009, Giguet-Covex et al. 2014).  Importantly, ancient environmental DNA can provide highly informative and novel insights to past biodiversity and human land use even in the absence of other environmental proxies like pollen and macrofossils (Hebsgaard et al. 2009, Slon et al. 2017, Stahlschmidt et al. 2019). We will prioritise lake sediments over peat as a main source for DNA since the former preserves DNA better than the latter (Parducci 2019).

The main aim of this project is to explore past biodiversity in North-eastern Scotland using metabarcode (e.g., 12S) and metagenomic sequencing of ancient DNA extracted from lake sediments and peat bogs, with special emphasis on the period spanning the 5th to 11th centuries AD (also known as the ‘Dark Ages’). This encompass the Pictish period, which is an emerging research theme in archaeology and paleoenvironmental studies, especially since written historical sources are scarce. The study aligns with ongoing palynological and palaeolimnological research and will provide new insights to the relative abundance of wild and domestic fauna (and possibly floral diversity) across time, which will enable reconstruction of human land-use and long-term impact on native fauna and flora. The study sites will be decided by the student in consultation with the supervisory team, but we envision that the project will generate data from at least five sites.

While the student is expected to decide the final study sites, they have the option of accessing cores from archaeological sites anticipated to be analysed for pollen as part of ongoing research projects (e.g., the Leverhulme funded project ‘Coming into the Light: exploring the Dark Age environments of northern Britain’, which is led by Dr Tim Mighall and Dr Samantha Jones in the Department of Geography at the University of Aberdeen), including peat and lake sediment core samples taken near Cluine and Dummiefarline, which are fortified settlements linked to groups native to Scotland (i.e., the Picts). The student is expected to participate in field work (e.g., coring) where possible.

Pictish archaeology is a key and emerging research theme in the Department of Archaeology at the University of Aberdeen. Ongoing research includes large-scale excavations of Pictish hillforts and settlements, ancient genomics to reveal Pictish genetic ancestry, stable isotope analysis to understand diet and mobility of both humans and domestic animals, and osteological analysis of faunal remains. This project will enhance our understanding of the Pictish period by providing insights to changes over time in land use, as well as their long-term impact on native fauna and flora.

For more information about Pictish research at the University of Aberdeen, visit https://www.abdn.ac.uk/geosciences/departments/archaeology/the-northern-picts-project-259.php

Essential: The successful applicant should possess basic skills in DNA analysis, including experience with DNA extraction, PCR amplification, and the analysis of DNA sequence data. Preference will be given to applicants who can demonstrate proficiency in metabarcode (e.g., 16S or 12S) analysis. A keen interest or background in archaeology is also essential.

Desirable: Desirable skills include broader experience with bioinformatics, Linux operating systems and a familiarity with command-line interfaces. Previous experience with analysis of paleoenvironmental data, such as pollen and plant macrofossils, is highly desirable.

The project offers comprehensive training in state-of-the-art ancient DNA methods and pollen analysis. Where applicable, the student will also be trained in analysing tephrochronology and radiocarbon dating. We also envision that the successful candidate will partake in fieldwork (coring, surveying) where possible.

Metabarcode and metagenomic methods are powerful methods that can reveal new insights to past biodiversity and human impact on landscapes, especially in the absence of extensive archaeological excavation.  The proposed project will therefore have impacts not only to the scientific community but also for the public by providing completely new insights into human land-use and the impacts on local fauna and flora between the 5th to 11th centuries AD.

Current environmental metagenomics is costly, this project will therefore contribute to impact through the development of a novel uracil-DNA enrichment method which will reduce costs as well as improve the proportion of target DNA in the final datasets. The outputs of the proposed research will thus be valuable not only for the proposed project but also for the wider scientific community working on DNA projects, who wish to maximise their data-outputs at minimum costs. The method can in theory be applied to DNA extracted from single specimens or to environmental samples containing DNA from multiple individuals.

Pending reply from our proposed CASE-partner (NatureScot), we envision that the data and knowledge generated in this project can become important for organisations managing present and future biodiversity. In other words, the project provides opportunity to link the past to the present, which holds potential for informing the future. Specifically, this research project aligns with Scotland’s Biodiversity Strategy.

Linus Girdland Flink is a specialist in ancient DNA and his research is mainly focussed on answering questions about human migrations/admixture and animal domestication. He is also participating in a new research project on the Norse site L’Anse aux Meadows in Newfoundland aimed at reconstructing past biodiversity by means of ancient environmental DNA and pollen and plant macrofossils.

Gill Plunkett’s expertise crosses archaeology and palaeoecology, with a specific focus on understanding past human-environment relationships. She has wide experience of working with peat, lake and archaeological sequences using a variety of proxies to reconstruct past environmental and climate change, including human impacts and the drivers and impacts of past climate change.

Tim Mighall is a palaeoecologist with expertise in pollen, non-pollen palynomorphs and sediment geochemistry. He has a particular interest in the environmental impact of past mining and metallurgy and, more widely, understanding past human-environmental interactions. Tim is currently working on a new research project with Samantha Jones examining the ‘Dark Age’ Societies of northern Britain using a combination of palaeoenvironmental techniques.

Samantha Jones specialises in the reconstruction of past environments using pollen, non-pollen palynomorphs and geochemistry. She has worked on a broad range of projects in Borneo, Spain & Scotland. Her current research is focussed on the so called ‘Dark Ages’ north of the Roman frontier in Scotland with particular emphasis on the impacts of social and/or environmental change on Iron Age-Early Medieval societies.

Year 3: continued analysis of data, co-analysis with other data such as pollen and macrofossils (i.e., synthesising the new data and results within the broader research context), complete data chapters and write up final thesis.

We expect that each data chapter will be formatted as a journal article that will be submitted during Year 3 or shortly after the student completes their programme of study (at 3.5 years of study).

A potential CASE partnership with NatureScot is currently under discussion. An update will be provided in due course.