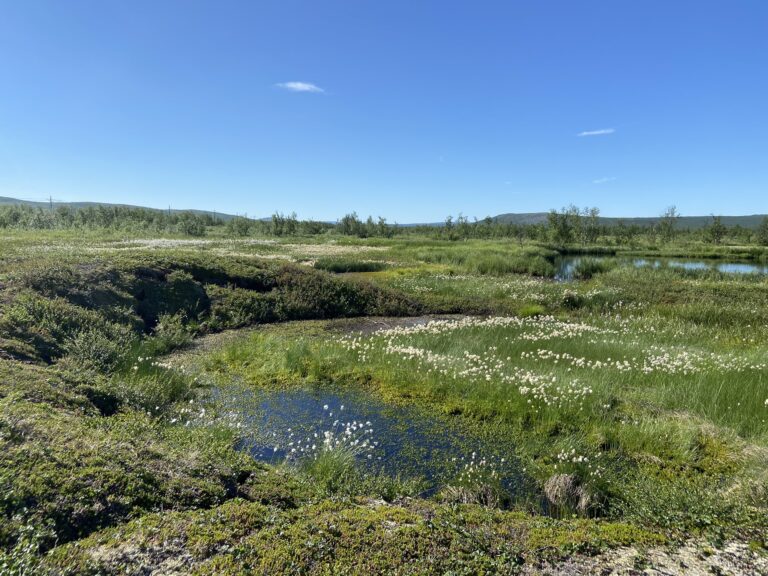 Will carbon release from permafrost peatlands at high latitudes lead to the much discussed ‘carbon bomb’ and further warming of climate through positive feedback mechanisms? Or, alternatively, will the peatlands act as climate buffers through invigorated carbon sequestration driven by increased productivity under a warmer climate and/or suppressed decomposition in newly saturated conditions from thawing permafrost? This is a fundamental question for understanding the trajectory of future climate change.

Overview: Permafrost peatlands contain globally important amounts of carbon owing to cold conditions that lead to supressed decomposition. Climate warming threatens the stability of this carbon store (Fewster et al., 2022), which could ultimately lead to a positive feedback in the climate system (‘the carbon bomb’). However, thawing permafrost may also drive a shift to wetter conditions and increased carbon accumulation which could act as a ‘self-repair’ mechanism. As field monitoring campaigns only span the last few decades this study will use a palaeoecological approach (see Sim et al., 2021) to examine these conflicting hypotheses across a network of northern hemisphere permafrost peatlands.

Significance: Despite their relatively small global areal extent (3% of the earth’s land surface), permafrost peatlands are disproportionately important to the future of global-scale ecosystem-climate feedbacks. Organic-rich permafrost peat stores approximately 277 Pg of carbon (C), equivalent to 14 % of the global soil C store (Tarnocai et al., 2009). Until recently this huge soil C store has been rendered effectively inert, protected from decomposition by lethargic microbial activity in frozen soil conditions. However, twenty-first century climatic warming is projected to be greatest in high-latitude areas of the Northern Hemisphere, where most permafrost peatlands occur. Widespread permafrost thaw exposes this vulnerable C store to potentially rapid decomposition, with a huge reciprocal global warming potential from increased fluxes of greenhouse carbon gases to the atmosphere (sometimes referred to as the “carbon bomb”). However, recent research conducted on three peatlands in subarctic Sweden indicates that this global warming effect may be partially compensated, or even outweighed entirely, by increased CO2 sequestration through newly invigorated ecosystem productivity and peat accumulation under warmer conditions (Swindles et al., 2015a; Sim et al., 2021). The project aims to evaluate whether this self-repair mechanism is occurring in permafrost peatlands at a hemispheric scale and whether it has the potential to impact on future climate.

Rationale: Will carbon release from permafrost peatlands at high latitudes lead to the much discussed “carbon bomb” and further warming of climate through positive feedback mechanisms? Or, alternatively, will the peatlands act as climate buffers through invigorated carbon sequestration driven by increased productivity under a warmer climate and/or wetter suppressed decomposition in newly saturated conditions from thawing permafrost? These are pressing questions with important, global implications for the future of climate-biosphere interactions. High latitudes are projected to be subjected to the greatest climate warming over the coming decades. The implications of projected warming for ecosystem structure and carbon budgets at high latitudes are likely to be of global importance through biosphere-climate feedbacks that have the potential to either accelerate or dampen future warming on a global scale. Zones of permafrost have retreated rapidly poleward in recent decades, evidenced by the widespread development of degradation features such as thaw lakes, increased active layer thickness and in some locations the complete disappearance of permafrost. Timescales of field monitoring campaigns (greenhouse gas flux rates, water-table and temperature measurements) are limited to the last two to three decades, are limited in terms of spatial scale, and thus provide only a partial record of the response of permafrost peatlands to recent warming. Palaeoecological approaches can provide important baseline information over much longer timescales, necessary for a fuller understanding of the fate of degrading permafrost peatlands. A dearth of palaeoecological studies into the response of permafrost peatlands to climatic change during the instrumental period (the last 100-150 years) leaves the future of degrading permafrost peatlands, and their likely feedbacks to the global climate system, highly unclear. Swindles et al. (2015a) used a novel high-resolution palaeoecological approach to understand changes in three permafrost peatlands (Abisko region, Arctic Sweden) over the last ~200 years. The region has experienced rapid warming during the twentieth century; mean annual air temperature exceeded the 0°C threshold around AD 2000, pushing the area beyond the climatic threshold at which permafrost can be sustained. As predicted, a drying trend was identified in the three Swedish peatland sites until the late–twentieth century; however, two sites subsequently experienced a rapid shift to wetter conditions as permafrost thawed in response to climatic warming, culminating in collapse of the peat domes. Based on these data, Swindles et al. proposed a five-phase model for permafrost peatland response to climatic warming that showed a shared ecohydrological trajectory towards a common end point: inundated Arctic fen. This final stage has the potential for enhanced carbon sequestration through newly invigorated productivity and rapid peat accumulation. The findings indicate that the buffering capacity of permafrost peatlands to future climate change may be greater than previously thought and are in contrast to the paradigm that catastrophic loss of peatland C stock, and subsequent accelerated climate warming under future climate change is the only trajectory.

Desirable: Use of R, analysis of microfossils, climate modelling

We have identified several key regions characterised by rapid climate warming that contain a significant area of permafrost peatlands, including Arctic Canada, Alaska, Svalbard, Russia and Sweden. We hold several intact cores at QUB from Arctic Canada, Alaska and Sweden. In addition, we have long-standing collaborations with colleagues in other institutions who hold cores in their respective institutes for this analysis. In the laboratory the student will carry out bulk density analysis and calculate peat carbon accumulation following standard methods. Testate amoeba analysis will then be carried out on each core and statistical transfer functions will be applied to generate water-table depth reconstructions. Chronologies will be developed for each core for each core using 210Pb, AMS radiocarbon (14C), spheroidal carbonaceous particles and tephrochronology (at the QUB 14Chrono centre). Active layer thickness and instrumental climate data will be compared with the peat-based data. In addition, the student will use remote-sensed images to investigate whether there has been changing wetness (e.g. increase in open water areas) in the study sites over the last few decades.

In the laboratory the student will carry out bulk density and loss-on-ignition analyses, and carbon accumulation calculations following standard methods (e.g. Chambers et al., 2011). Carbon accumulation will be calculated following Tolonen and Turunen (1996). Testate amoeba analysis will then be carried out on  each core and statistical transfer functions will be applied to generate a water-table depth reconstruction (Swindles et al., 2015b). Accurate, precise chronologies will be developed for each core using 210Pb, AMS radiocarbon (14C), spheroidal carbonaceous particles and tephrochronology (at the QUB 14Chrono centre). Data on active layer thickness and instrumental climate data to compare with the peat-based data. In addition, freely-available remote-sensed images will be examined to investigate whether there has been changing wetness (e.g. increase in open water areas) in the study sites over the last few decades.

Training will be provided in terms of fieldwork logistics and sampling, laboratory analysis, statistical analysis and modelling, remote sensing and scientific writing.

This work will form a significant contribution to our understanding how arctic soils (and the arctic carbon cycle more generally) are changing, and the role of peatlands in accelerating or decelerating future climate change. The research will be of interest to academics and a wider audience from anyone interested in climate change, biodiversity, and peatlands as nature-based climate solutions. The work will help us further understand the natural climate sinks/sources that are currently poorly understood by climate models. The results of this project will enable a greater understanding of organic soil responses to climate change in Arctic environments and thus has the potential to improve model forecasts of future climate change.

Year 1: (a) Conduct a literature review and draft out a methodology chapter; (b) health and safety training in the field and laboratory; (c) undertake fieldwork to collect samples; (d) rangefinder radiocarbon dating (e) identification training for laboratory work; (f) Start the analysis of the cores: core description and sampling, sample preparation and data collection.

Year 2: (a) Continue the data collection in the laboratory; (b) Complete the core collection (fieldwork); (c) Obtain further radiocarbon and 210Pb dates for new and completed cores; (d) undertake preliminary data analysis including statistics; (e) Attend a conference and present a poster or paper; (f) Start drafting an introduction and results chapter; (h) Submit a peer-reviewed paper in a suitable academic journal.

Year 3: (a) Continue with the data collection and analysis until six months before completion. (b) Obtain any further radiocarbon dates (c) Focus on writing the remaining write up (discussion and conclusion).