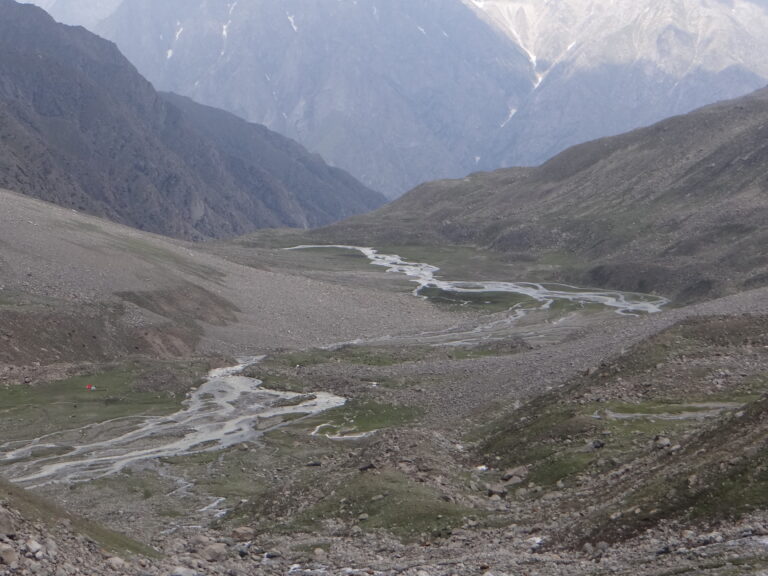 The Hindu Kush-Himalaya (HKH) mountains contain considerable freshwater reservoirs in the form of snow, glaciers, lakes, permafrost, and wetlands supporting a population of ⁓1.3 billion (Singh et al., 2016). The HKH harbours ⁓50% (by area) of all the world’s glaciers outside the polar realm. These are particularly sensitive to minor changes in temperature and precipitation due to their latitudinal position, high ablation rates and specific accumulation processes. Several studies show that Himalayan glaciers are retreating in general with few exceptions [1]. These changes and their future implications are not fully understood owing primarily to the uncertainties caused by the scarcity of spatiotemporally continuous observed data available in the region. The geophysical models that integrate the hydrological cycle with glaciological process in a catchment, also referred to as glacio-hydrological models, can function as an important tool to estimate and predict the basin-scale mass balance and its effect on meltwater and river discharge (Kumar et al., 2016). There are several temperature-index based glacio-hydrological models which have been developed for the estimation of discharge and mass balance in a glacierised catchment, but all these models are primarily dependent on the spatially extrapolated near-surface air temperature observation from meteorological stations. The novelty of the present project relies on exploiting the strong relationship established between remotely sensed land surface and air temperatures for different climatic and elevation zones in the Himalaya (Singh et al., 2019), so that the spatially continuous land surface temperature could be used instead of the spatially extrapolated air temperature observations in the glacio-hydrological model. The project will benefit from available remote sensing data [Sentinel, Landsat, Moderate Resolution Imaging Spectroradiometer (MODIS), Gravity Recovery and Climate Experiment (GRACE) and Tropical Rainfall Measuring Mission (TRMM), reanalysis climate data from European Centre for Medium-Range Weather Forecasts (ECMWF) ERA 5, Earth System Grid Federation (ESGF) and Asian Precipitation-Highly-Resolved Observational Data Integration Towards Evaluation (APHRODITE)] and observed air temperature, precipitation, discharge, mass balance data and established melt factors for debris-covered ice, debris-free ice and snow. Through this PhD project, we aim to develop and apply a glacio-hydrological model that will use land surface temperature for estimation of discharge and mass balance in glaciated catchments in the Himalaya. The model will be first set up, validated, and applied in the Baspa basin, Western Himalaya and subsequently applied to, and tested in, other glaciated catchments in the Himalaya.

There are two main approaches to modelling melt in a glacierised catchment: energy balance models, and temperature index or degree-day models (Hock, 2005). The energy balance approach requires several weather parameters (incoming and reflected shortwave radiation, downwelling long-wave radiation, air and surface temperature, relative humidity and wind speed and direction) collected on or near the glacier or snow (i.e., for the non-glaciated area) surface. The availability of such in-situ data is rare in the Himalaya so the temperature index, or degree-day approach, is more practicable and can easily be applied at the catchment scale i.e., it is computationally simple and requires only air temperature as forcing. This project will use the degree-day approach as despite its simplicity, the model gives competitive results with respect to energy balance models implemented at the catchment scale and air temperature is a good index for snow and ice melt estimation, representing a proxy for components of energy balance models (Kumar et al., 2016). The congruence of spatially continuous satellite derived land-surface and station observed near-surface air temperatures has a region-specific consistency and therefore can be used in combination to generate a more complex GHM, able to operate at the regional scale. To further improve the robustness of the complex regional models, additional atmospheric parameters (e.g., precipitation, radiation, humidity) are needed and could be extracted from atmospheric models like the European Reanalysis fifth generation (ERA5).

Annual field work in Himalaya is the critical aspect of this project and will be conducted in Baspa basin, Himachal Pradesh, India. The principal supervisor has a decade long experience of working in the region and has different in-situ observed datasets that are critical for the project and will be updated/validated during the field expeditions. In addition to the named supervisors, this PhD project will be supervised and supported by members of the Cryosphere and Climate Change Research Group at the University of Aberdeen who have complementary sets of skills required for the completion of the enlisted objectives. The student will also benefit from the diversely experienced PhD students and post-docs working with member of staff in the group.

The student will have full access to training opportunities at the University of Aberdeen and Queen’s University Belfast and will benefit from attending various scientific meetings and conferences. We will support the student to lead on papers originating from the project and they will present at international conferences to maximise their exposure. The existing collaborations of the supervisors with many national/international institutions will provide the student a substantial opportunity for networking and career progression.

Mountains cover a significant part of the earth’s land surface, and much of the global population is dependent, directly, or indirectly, on the ecosystem services provided by them. The supply of these services is susceptible to change and streamflow in glacier-fed rivers and mass balance change of glaciers are proxies to understand the implication of future changes in climate-sensitive mountainous regions. The overall aim of this project is to develop a glacio-hydrological model that will use modified spatially continuous land surface temperature instead of conventional air temperature data as the primary forcing for the estimation of mass balance and discharge. The use of land surface temperature derived from remotely-sensed data means that the model can be applied more widely in glaciated mountainous catchments in regions around the globe where observational data are sparse/missing. The model will be developed in Python and eventually will be made available through an open access Python repository.

The model will be set up and validated in Baspa basin (⁓1100 sq. km) in the Western Himalaya. The catchment has ⁓15000 inhabitants following a subsistence economy, reliant on agriculture and animal husbandry, who are susceptible to changes in glacier meltwater discharge and flooding magnitude/frequency. The project will directly engage with the local communities, stakeholders, and policymakers to understand the past and future variation of discharge and mass balance of glaciers in the Baspa basin. After validation, the model will be applied in other similar catchments in the Himalaya and then later to other high mountain regions like the Alps and the Andes. The anticipated outcomes will be directly beneficial to high-mountain communities delivering improved knowledge of future changes in water resources, assisting in mitigating the effects of climate change and extreme events.

3rd year: analysing the field data; calibrating and validating the model; applying the model in the study area and other similar catchments in Himalaya; creating a Python module of the model