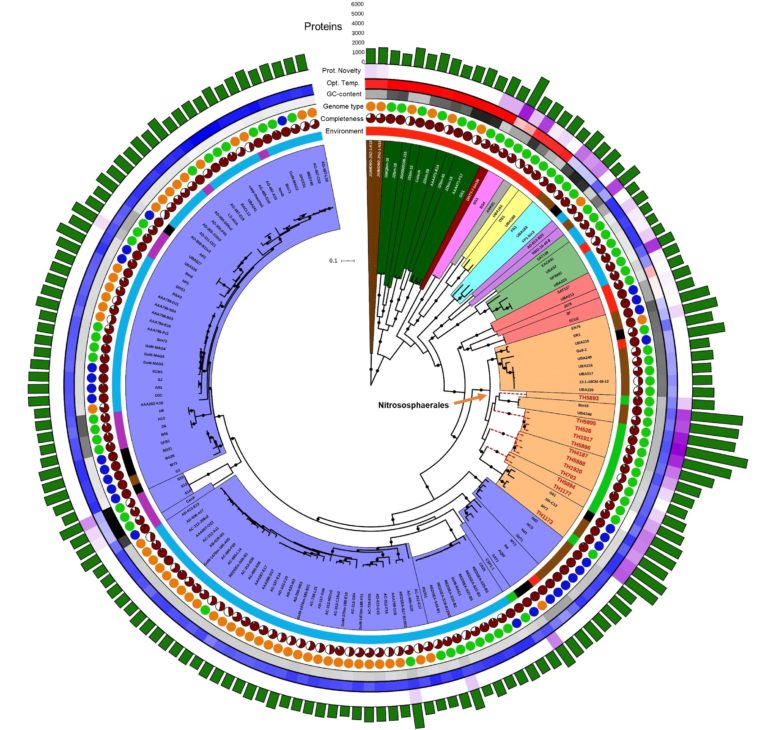 Understanding how biological diversity is created and maintained has been a key challenge for biologists for more than a century. Diversity is greatest in bacteria and archaea and its description has been dramatically improved by high-throughput sequencing which has been applied to a large range of land-use ecosystems. Large public genomic repositories now provide a fantastic opportunity to move beyond description and to solve some of the mysteries concerning the physiological and evolutionary mechanisms involved in biological diversification. Lateral gene transfer has been proposed as a key mechanism driving prokaryotic adaptation and this mechanism occurs within microbial  population, including both closely related or more distant organisms (Sheridan et al., 2020).
Despite this knowledge, microevolutionary mechanisms leading to such diversity within microbial populations have been largely ignored by microbiologists partly due to the species concept debate and to the previously poor genetic diversity recovered from highly diverse natural microbial populations. However, the release of ultra-deep sequencing technology (such as Illumina NovaSeq) now opens new opportunities for microbial population analyses, such as population metagenomics, which allows exploration and interpretation of the myriad of individual haplotypes that provide the population-level diversity of natural microbiomes (Rubino et al., 2017).
The proposed research will therefore use available deep metagenomics sequencing from a range of soils to allow the student to become familiar with and establish a bespoke bioinformatics pipeline for population-level metagenomics analysis (Rubino et al., 2014; Nicholls et al., 2020). In parallel, the student will generate novel deep metagenomics sequencing of soils from across a range of soil ecosystems so that when the sequencing data has been generated the bioinformatics pipelines will be in place to allow them to test specific hypotheses relating to the physiological and evolutionary microbial adaptation required in different land-use soils and across several environmental gradients (either pH, temperature, moisture or other abiotic factors). In particular, soils of different structural complexity (including diverse pore sizes, moisture content) will be analysed as such complexity this has been hypothesised to impact biological diversity, including those of microbes (Bengough et al., 2011).
The student will subsequently test the in-silico predictions experimentally by performing in vivo experimental environmental perturbations, as previously done in Gubry-Rangin laboratory (Zhao et al., 2020), for example by either altering water or by changing pore structure through compaction or mixing to simulate tillage. This approach will allow to determine the effect of several environmental changes on the existing standing variation in the native and perturbed populations through the previously developed population metagenomics pipeline. In addition, several key microbial functions in the soil will be analysed including ammonia oxidation performed by ammonia oxidising archaea and bacteria (Gubry-Rangin et al., 2015). The consequences of the different environmental changes on the stability (resistance and resilience) of the ecosystems and associated ecosystem services, processes and functions will be analysed using multivariate statistics approaches.
This project has the following aims:
• Develop a bioinformatics pipeline analysing the microevolutionary processes regulating the microbial diversity using population metagenomics
• Reconstruct microbial metagenome assembled genomes (MAGs) from a range of soils and land-use ecosystems
• Determine the level of standing variation in microbial populations from different land-use ecosystems
• Understand the impact of environmental change on fine-scale microbial biodiversity using an experimental perturbation experiment.
Essential skills

Societal impact of this research:
This ambitious research is important and is likely to attract both academic (from diverse disciplines) and general audience interest given the urgency of understanding the impact of environmental change on biodiversity.
The impact of environmental change on biodiversity will be analysed through the use of different land-use ecosystems including peatlands, forest or agricultural soils for example. This will be analysed through an innovative fine molecular and genomic level, which has never been applied before. As such, it will produce significant scientific results for the academic community but will also impact on our understanding of maintenance of microbial biodiversity in terrestrial ecosystems. Results to be obtained will be disseminated to a wide community through public engagement.
In parallel to the impact on biodiversity, this project will also determine the impact of environmental change on the ecosystem services, processes, function and resilience. It will therefore be of interest for environmental management policy. These results will be transmitted to end-user community and policy-makers interested in environmental change.
This research will have a strong impact on the fundamental research and this project is expected to deliver several high-impact publications of international quality, including on:
• Metagenome assembled genomes (MAGs) reconstruction and evolutionary mechanisms associated to different soil ecosystems
• Bioinformatics pipeline analysing the microevolutionary diversity
• Impact of environmental change on fine-scale microbial biodiversity.
The novel MAGs assembled during the project will be deposited on public databases for use by other researchers, either in academy or in industry. They may be of interest for their potential industrial interest and may lead to the discovery of novel pharmaceutical/antibiotic compounds, especially for the previously underexplored acidic soils.
The outcome of this research will also be disseminated to the general public through several local dissemination events (in Aberdeen and Belfast), such as primary/secondary school workshops, Techfest, Explorathon.

During the first 6-months, the student will complete an induction process at UoA and QUB and will spend time in the research laboratories of all supervisors to get familiarised with the research environment. The student will review the literature on the impact of environmental change on microbial diversity at multiple phylogenetic levels and on metagenomics. The student will also gain technical skills and hands-on experience in using the relevant approaches, including bioinformatics, soil sampling and molecular biology.

The student will then focus on learning to use the bioinformatics tools and generate a pipeline to analyse the microevolutionary diversity and apply it on a range of soil metagenomes available from the UoA lab and from public databases. This will be performed over 12 months and these results will be fully analysed and presented in a national conference (MMEG or SAM).

The following year will be dedicated to selecting a range of soils to perform the deep-sequencing metagenomics approach. DNA extraction optimisation, sequencing (outsourced in an external company), MAGs assembly and annotation and application of the microevolutionary diversity pipeline will likely require 12 months.
In parallel to the bioinformatics analyses, the experimental incubation experiment will be established, and both molecular and bioinformatics analyses will also be applied. Analysis of ecosystem function and resilience (as well as statistical implementation) will require another 6 months. These results will be fully analysed by the end of the PhD and presented in an international conference (ISME).

While this schedule does not take into account the periods required for training, non-HEI placement and leave, the remaining time will be required to write the thesis and finalise associated publications. Manuscripts will be drafted throughout the PhD and at least one high impact manuscript will be submitted before thesis submission.