Investigating the effects of parent-offspring conflict on social organisation, growth, and stress in a free-ranging neonate 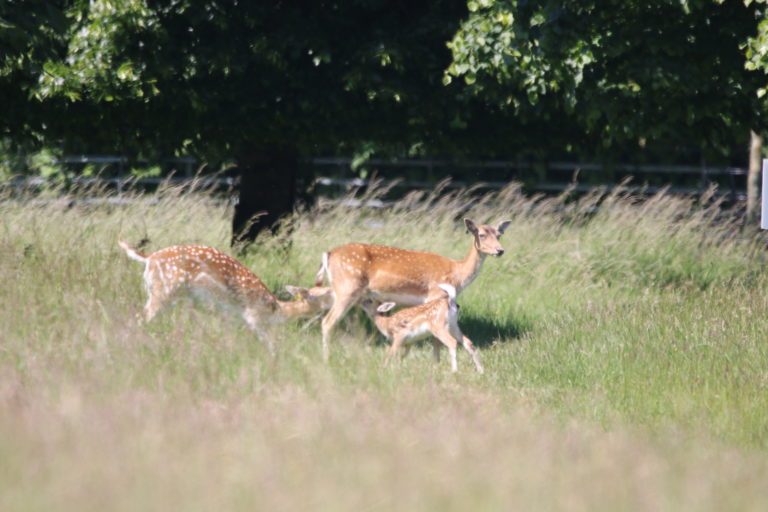 As the supervisors have a number of projects running in this location, the student will also benefit from mentorship available from students more advanced in their studies.

There is a substantive fieldwork commitment associated with this project and you should be prepared for prolonged periods at the study site. Fieldwork is cyclical beginning in June with the birth of fawns (tagging and measuring), matching fawns-mother pairs as they enter the herd, recording social behaviour and (allo)suckling by the fawn, and aggressive acts directed to the fawns by mother and alien females. Intense periods of fieldwork runs from June to December. Additional periods of fieldwork will involve hair collection during the April moult. Students are also be expected to contribute to data collection during the October rut.

The Phoenix Park is a well-established study site with an international reputation for the study of wild large mammal behaviour. Because the majority of deer are identifiable, we are able to follow them from mating through pregnancy to birth (see Connie Baker-Arney, QUADRAT student). Fawns are given unique letter-number/coloured tags and measured and weighed shortly after birth (approx. 100 fawns/year). Thus, when they are brought into the doe-herd by their mother we can record fawn-mother and fawn-alien doe interactions. The open spaces inhabited during the day permit regular photographing of identifiable fawns as they age which permits estimation of growth rates (see G. Duffy, QUADRAT intern student). Moreover, we are able to collect hair samples from known individuals using non-invasive methods in order to estimate stress levels via cortisol concentration.

Understanding why an individual survives to reproduce, while others do not is a fundamental question in biology, and central to our understanding of natural selection. Those individuals that survive to reproduce will pass their genes on, and the heritable traits that offspring receive will contribute to the evolutionary pathway of that species. Parental investment is a major contributor to survival – those individuals that experience low or restricted levels of investment are likely to suffer an increased probability of mortality. This project addresses this issue focussing on parent-offspring conflict.

Photo by Connie Baker-Arney. The photo shows a mother doe in Phoenix Park suckling two deer: her new fawn which is aligned parallel to her and her three-year-old daughter who is behind her.

Due to the precision with which we are able to collect data with a number of diverse methods, we expect that this project will result in a number of high-impact publications relating to both theories of parent-offspring conflict and allosuckling. Given the general difficulties associated with studying large mammals in the wild we expect that the project will have a high degree of impact in the field, there is a high probability that this project will contribute to theoretical development. Furthermore, results from the project will provide detailed and invaluable information for improved understanding and management of zoo, laboratory and farmed animals.

The field element of this project is determined by the natural behaviour of the study population. The fallow deer rut occurs in October where most females will mate and with most fawns born the following June. Fieldwork of this project is, therefore, cyclical beginning in June.

September: Fawn and doe hair is collected as the deer go through moulting in preparation for their winter coats. Hair will be assayed to determine cortisol and testosterone levels.

October: The rut takes place and matings are recorded.

December-January:
Behavioural observations: mother-offspring estimates of conflict (see above) and conflict with other females.
Retrieval of dropped DD collars.

April: Fawn and doe hair is collected as the deer go through moulting in preparation for their summer coats. Hair will be analysed as above.

The proposed timeline for this project is to spend most of the first two years in the field.

Years 3 and 4
This year will be spent predominantly in the lab and write-up.