Populations at the edge: range dynamics and conservation of the Great Crested Newt under global change (CASE) 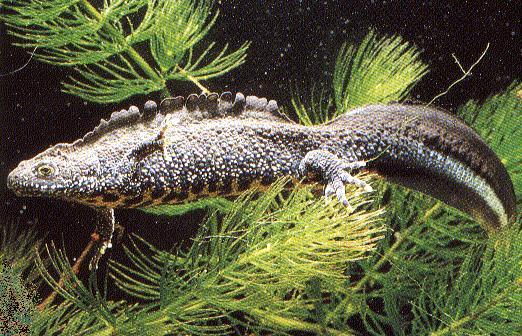 Obj. 1: The student will identify and sample populations of T.cristatus along its British range including the Scottish Highlands (north-west edge of the species’ world range), central Scotland (northern limit of its continuous UK distribution) and central England (core of the UK distribution)[2]. DNA samples will be collected to generate genomic datasets and identify genomic regions potentially under selection associated with environmental gradients and provide information on likely barriers to dispersal and range shift[e.g.4].
Obj. 2: Genetic information will be integrated with existing information on the species’ demography, dispersal, and current distribution to parameterise a process-based model[1,5-6] and forecast species’ persistence and expansion under scenarios of climate change and key stressors such as non-native predators and water pollution. We will include also models of drought, which is crucial for species relying on wetland ecosystems.
Obj. 3: The model will be used to test alternative management interventions, thus informing conservation strategies that account for future environmental change.
Selection of field sites[2], as well as plausible management interventions[3], will be made in consultation with NatureScot and other relevant stakeholders.

The ideal candidate would have strong passion for ecology, genetics, and evolutionary biology; be enthusiastic about learning new skills and have some experience in quantitative analyses. They would hold a minimum of a 2:1 Honours degree (or equivalent) in biology, ecology, zoology or related disciplines and have strong quantitative skills.

Field sampling
Identify and sample ~100 individuals of T.cristatus from multiple sites along its British range including the Scottish Highlands (north-west edge of the species’ world range), central Scotland (northern limit of its continuous UK distribution) and central England (core of the UK distribution)2. DNA will be sampled from eggs[2] (NatureScot licence 118416).

Characterisation of adaptive genetic variation
Extract DNA samples and use a sequence capture approach (with publicly available reference transcriptomes) to generate thousands of polymorphic loci (SNPs) from across the genome[7,8]. Identify genomic regions that are potentially under selection associated with the environment (e.g., temperature, pond pH, precipitation) using genotype-environment association analysis[9]. Use the genetic data to estimate effective population size and look for past declines[10]. Perform landscape genetic analyses of putatively neutral SNP loci to provide information on dispersal and likely barriers to range shift through relating patterns of gene flow with landscape heterogeneity[11].

Stakeholder workshop and development of management scenarios
Co-design alternative plausible management interventions with stakeholders, in the context of an active workshop led by the student and test them using the model[14-15]. Landowners including farmers and foresters, as well as NGOs have collaborated in previous interventions for this species and enthusiasm remains high[3,14,16]

This research will have substantial impact both for scientific advance and for management. It will be one of the first studies to apply and further develop much called-for cutting-edge models that integrate species’ ecology and adaptive genetic variation for forecasting species’ responses to global changes. Further, the project will test alternative management interventions, co-designed with relevant stakeholders, providing quantitative evidence to support conservation of a wetland flagship species under global changes. Enthusiasm for conservation of this species is particularly high amongst landowners in the Highlands and central Scotland but sites are still being lost. The evidence from this project would help focus future interventions and provide long-term security for the species.

This research is important because it addresses responses to global change of a group, Amphibians, that has been declining globally, inhabits a particularly threatened ecosystem, wetlands, and needs improved and integrated conservation strategies. The Great Crested Newt is of international interest and it has been constantly declining in Europe. In Scotland, as a species at the edge of its world range, it might be especially vulnerable. Populations are protected by both European and UK legislation, and much effort is going into understanding the best management practice. However, habitat requirements in northern Europe are different to elsewhere in the species’ range, so any intervention must be based on locally gathered evidence.

Deliverables will include forecasts of the species’ persistence and potential expansion under future multiple threats scenarios; assessment of the relative effectiveness of alternative management strategies; involvement of stakeholders in a student-led workshop facilitated by NatureScot; training of the student on diverse scientific methods that are currently cutting-edge and in high demand. The research will likely result in high impact publications in the fields of molecular ecology, global change biology, eco-evolutionary modelling, and biodiversity conservation.

The proposed timetable is quite ambitious, but it can be calibrated according to the student’s interests and progress.

Review of the literature. Collating of existing data on newt’s genetics, demography, dispersal, habitat requirements, abundances and environmental data layers. Selection of the field sites and planning for fieldwork, including obtaining any necessary permits. Training on field techniques and DNA sampling ahead of the field season. Training in wet lab, SNPs data analyses and bioinformatics, population genetic analyses and other required statistical approaches required to analyse the genetic data.

Months 22-30
Parameterisation, calibration and validation of the RangeShifter model. Training in the required modelling and spatial analyses techniques. Running of simulations over future climate change scenarios and analyses of model outputs. Starting the writing of third and fourth manuscript: 3) Functional connectivity of T. cristatus in Scotland; 4) Forecasts of T.cristatus persistence and range expansion under future climate change.

Month 31-40
Stakeholder workshop held at NatureScot for presentation of results and co-design of plausible management scenarios. Modelling the relative effectiveness of those scenarios for the persistence and expansion of T.cristatus. Write up the results in a 5th manuscript and develop a conservation guidance document together with NatureScot.

This is a CASE sponsored project in partnership with NatureScot.