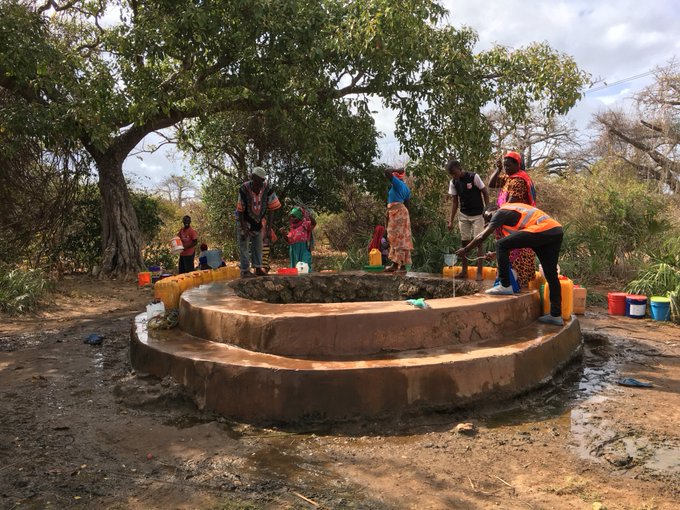 High coastal population growth rates, with associated water demand and environmental changes including climate change are putting enormous pressure on coastal groundwater resources. Groundwater is more resilient to increasing climatic extremes, and is the only source of water during droughts, but if over-extracted, is vulnerable to depletion and underground salinisation from the ocean.

In East Africa (EA), increased birth rates, development and migration from inland areas have increased demand for water and land leading to poor sanitation and water supply. Groundwater is often the only year-long reliable source of freshwater essential for sanitation, agriculture, and consumption but saline intrusion causes long-term contamination.

The UNESCO World Heritage property of Kilwa Kisiwani (KK), a small island off the coast of Tanzania, was once a particularly celebrated maritime city-state which dominated a large part of the Swahili coast during the late medieval period. KK was then a prosperous city with many mosques and palaces, described by the 14th-century explorer Ibn Battuta as, ‘the most beautiful of cities and elegantly built’. Various authors record KK had a population of between 4,000 and 30,000 in the 16th-century, which had declined to ~1,000 by the 19th-century, but is currently rising again to over ~1,200 people.

Archaeological evidence suggests that, after some time, the island’s freshwater could no longer sustain the sultan’s palaces, pilgrims to the mosques and seafaring traders. Today, the island has the remains of at least 17 stone-wells, most of which are abandoned or too salty to drink. Three are still in use though have higher levels of salinity than on the mainland. Previous well excavations on KK have shown the water table to be up to 2m higher in the 14th-century.

The multidisciplinary project will investigate how availability and quality of freshwater from wells contributed to the decline of KK at different stages of its history, and how water management can alleviate water shortages allowing local development of the EA coast and island communities.

The candidate will develop conceptual and numerical models of the freshwater aquifer of KK Island and surrounding coast, which will be used to analyse historic, present and possible future climate and demographic scenarios, including water use scenarios affecting KK during different periods of climate and prosperity, and to identify how much water can be taken from wells during rainy and dry seasons before the water becomes too saline. They will learn from and guide local people in freshwater management to determine good practice in coastal areas along the EA coast. The models will build on and integrate the extensive hydrological (groundwater levels, salinity, geophysics) and archaeological (well mapping, well use) data collected as part of previous research by the supervisory team, expand them through additional seasonal surveys.

The PhD project’s specific objectives are to: (1) Reconstruct the volume of freshwater that is (present), was (past) and will be (future) available at different times of the year at Kisiwani island and the neighbouring Kilwa coast; (2) Determine what size of maritime community the fresh groundwater could have supported at different periods of Kilwa Kisiwani’s history based on ancient stone wells and cisterns records and climate reconstructions; (3)  Identify how much water can be sustainably extracted from wells on short (seasonal) and long (multiannual) timescale and support future community development in the current context of rapid population growth and increasing climatic extremes, before the water becomes too saline for use; (4) Learn from and guide local people in fresh water management to determine good practice for access to fresh groundwater in coastal areas along the East African coast.

The project would suit a numerate scientist with a first degree in earth science, hydrogeology, environmental science or a related discipline. The student will be a member of a vibrant team of PhD researchers at the host Universities and will gain hydrogeological fieldwork and modelling skills, relevant for industry or academic careers.

Pollard, E. (2012) Present and past threats and response on the east coast of Africa: an archaeological perspective. Journal of Coastal Conservation 16 (2): 143-158.

For hundreds of millions of people around the world living in coastal and island communities, access to freshwater is reliant on groundwater contained in shallow coastal aquifers. High coastal population growth rates, with associated water demand and environmental changes are putting enormous pressure on coastal groundwater resources. The pressure is exacerbated by  increasing climatic extremes due to climate change. On the EA coast, groundwater is often the only year-long reliable source of freshwater essential for sanitation, agriculture, and consumption. Saline intrusion is a noted issue in coastal areas of EA where over-extraction of freshwater results in ingress of saline water, causing long-term contamination that cannot easily be remedied. Adequate supply of clean freshwater is critical for development.

Ancient (dating from around 13th to 16th-century) mostly-abandoned wells such as found in the historic city of Kilwa-Kisiwani, show that groundwater from water wells has long been an important source of freshwater studying them and the availability of freshwater will improve the lives of the inhabitants as adequate provision of water is central to human health and economic development because water scarcity is a serious impediment to growth and poses a threat to political stability.

Determining the long-term availability of freshwater how its access was organised in the past, how it is developed in the present, and how groundwater and salinity response to abstraction pressure, climate and environmental change is critical to assessing availability and resilience of freshwater resources and identifying what population and activities such as tourism, agriculture and industry the ports could support at different times of the year and in the future. This methodology and findings can be applied to other areas of the EA coast (in Kenya, Comoros, Madagascar and Mozambique) and in coastal developing countries beyond EA to improve their economic development and welfare with access to freshwater.

The research project timetable will be adapted in line with the background and expertise of the research student. Nominally, the project schedule will include:

Year 1: Review of literature and datasets on the hydrogeology, land use/cover, past and present water use for Kilwa coast and island; collation of data from previous historic well excavations by project team showing what groundwater level and salinity were during their period of use; collation of previous hydrological and geophysical datasets by project team to provide information on the current 3D shape of the freshwater lens.

Y3: Construction and calibration of a groundwater model on past (archaeological) and present (hydrological-geophysical) observation datasets including population estimates since 11th-century and associated freshwater use, reconstructed sea level, and recharge based on land use/vegetation changes; definition of future scenarios of climate change (sea level, precipitation and evaporation change) and groundwater use, and scenarios of optimal design of water wells (distribution, depth, abstraction rate); second draft manuscript, local/national conferences.

Throughout the project, the research student will spend time working with the research groups at Universities of Aberdeen, Belfast and Dar Es Salaam to develop skills in hydrogeology, geophysical and geospatial technologies, community engagement and heritage conservation.