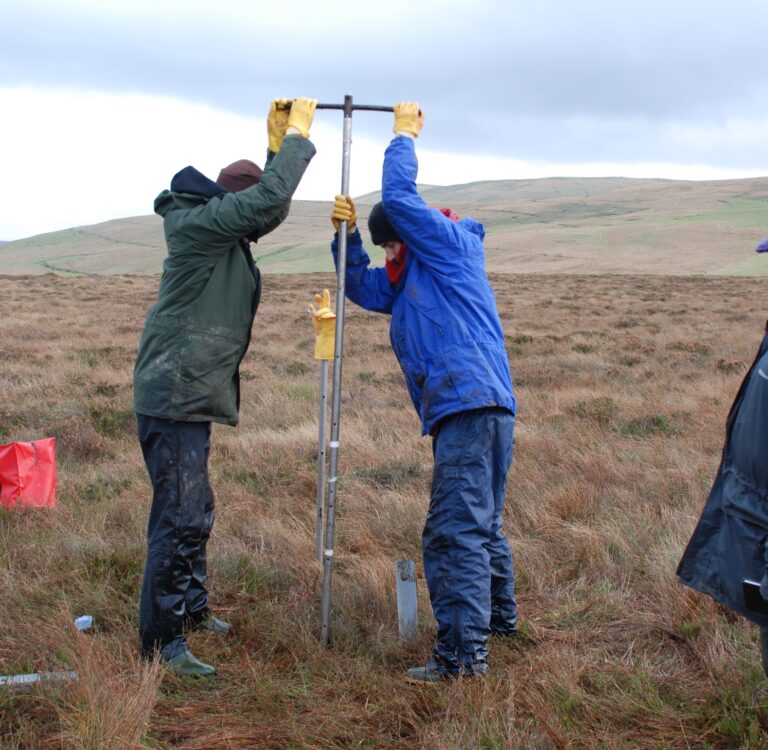 Past climate change can be reconstructed through the investigation of a variety of archives (proxies) such as ice cores, lake sediments and peatlands. These can be used to establish records of climate change at hemispheric, regional, and local spatial scales and over millennial to decadal timescales. Proxy measures allow us to extend climatic records beyond historical documents (as proxies can act as a measure for climate change when direct measurements cannot be made). These records are of value in reconstructing climate changes during our current warm period (the Holocene epoch) and in providing a spatial and temporal perspective for recent climatic warming and its impact. Regional and local climate reconstructions provide further information on climatic variability and responses by humans, and other environmental parameters such as biodiversity. To do produce this information effectively the methods used must be validated to understand their strengths and weaknesses, as all current established techniques have (different) strengths and weaknesses. To ensure their validity, the techniques used to collect accurate and reliable data need to be replicated and emerging ones such as non-pollen palynomorphs [NPPs] and Fourier Transform Infrared Spectroscopy ([FTIR] need to be rigorously tested.

Thus, the aims of this proposal are to (1) reconstruct climatic variability during the Late Holocene using peatland archives; and (2) to test the viability of emerging techniques (NPPs, FTIR) as proxy climatic indicators alongside more tried and tested ones. To do so, the project will identify several ombrotrophic (rain-fed) peatlands in Ireland and Scotland that are suitable to reconstruct climate change and collect core samples for laboratory analysis.

Blanket bogs are more common than raised bogs in the UK, so they will be better for the applied conservation part of this research. Raised bogs offer ‘better’ proxy-climate archives as the preservation of the proxies is usually better. Primary focus of the project will be upon indicator species that reflect past environmental changes within a study site or region. The student will apply well-established and reliable proxies, namely the analysis of plant macrofossils and testate amoebae, which have been widely used to reconstruct climate changes such as the Holocene thermal maximum and the Little Ice Age, and more abrupt climate shifts due to changes caused by the North Atlantic Oscillation c. 4500 years ago. They will act as a control to test the efficacy of relatively unexplored and emerging methods (NPPs, FTIR). Testing the validity of emerging methods is important as they can improve the reliability of reconstructions of past climate and environmental disturbance. To establish their reliability the datasets will be compared to the tried and tested methods reinforced by statistical methods including multivariate ordination techniques, the use of transfer functions and changepoint analysis.

The chronology of each core will be established by AMS radiocarbon dating, tephrochronology, and age-depth modelling. These records should prove valuable in terms of contributing to our understanding of the key processes and uncertainties linked to climate change and in characterising human behavioural responses to climate change by past cultures.

The four laboratory techniques will be undertaken on each core: NPPs, plant macrofossil analysis, testate amoebae and FTIR. Sampling sites will be targeted and preferably chosen if they have pre-existing analyses to enable the student to focus on those ones not analysed. NPPs are identifiable using light microscopy and form a large, inhomogeneous group of remains of organisms that represent a memory of former, local environmental conditions (see Shumilovskikh & van Geel, 2020). Testate amoebae are a polyphyletic group of unicellular amoeboid protists, commonly used as proxies of past hydrological changes and peatland water table depth which is linked to climate. Plant macrofossils, preserved such as leaves, stems, seeds and, and epidermis, can be used to identify plants that previously grew in the local area and are used to generate mire surface wetness reconstructions. FTIR is a technique used to obtain an infrared spectrum of absorption or emission of a solid, liquid or gas. FTIR spectra have been used to predict the organic matter composition in peat samples at various stages of peatland development and offer the potential to be a valuable proxy climate change. FTIR analyses will be conducted at the University of Santiago de Compostela. Statistical methods will be used to identify key changes in the dataset (changepoint analysis) with ordination techniques (e.g. PCA, DCA, structural equation modelling) to test and evaluate multivariate causal relationships. The project will focus on the last 3000 years so that the appropriate data can be collected to complete the PhD in a timely manner.

Training in plant macrofossils will be provided by Dmitri and Gill, testate amoebae by Graeme, NPPs by Tim and Ed and tephrochronology by Gill.

All the supervisory team have the expertise to supervise this proposal and provide training. All the necessary laboratory equipment is available between both institutions. Regular supervisory meetings will be held to review progress, implement an agreed timetable of work and discuss the results. The student will be based in Aberdeen but will spend 6 months in Year 2 in Belfast working more closely with Graeme and Gill.

The research will be of interest to academics and a wider audience from anyone interested in climate change, biodiversity, and the conservation of peatlands. Its impact will include testing emerging proxies to reconstruct past climate change. It will improve the validity of multi-proxy approaches to reconstruct proxy climate change from ombrotrophic peatlands (raised bogs and blanket bogs) and determine the sensitivity and reliability of the emerging proxies (NPPs, FTIR) used to reconstruct, for example, water table depths and disturbances e.g., fire and grazing.

Few, if any, studies have evaluated FTIR to reconstruct proxy climate. This proposal will be one of the first studies to test FTIR on different types of bog and against biological proxies. Whilst the use of NPPs is more commonly used, there are still gaps in our knowledge: we need to improve the range of consistently reliable NPPs as indicators of drier or wetter conditions on the bog surface. This can only be achieved by testing their reliability across spatial and temporal scales. This project is designed to do that. NPPs are recorded during routine pollen analysis but many of these studies only target selected types linked to human activity. Whilst other NPPs are known to be controlled by bog surface wetness (restricted to either wet pool or drier hummock microforms typical of bogs, and therefore can be linked to climate change), there have been few attempts to test their ability to accurately reconstruct former water table depths.

Given the growing importance of understanding climate change over the past few millennia, this kind of research is needed if we are going to maximise the use of peatland proxy-climate archives and to fully appreciate the timing and magnitude of such changes and the resilience of ecosystems and human cultures in the past and the future.

Supervisory team: Tim Mighall, Dmitri Mauquoy and Ed Schofield are based in the School of Geosciences at the University of Aberdeen as part of the Palaeoecology Research Group. Tim Mighall and Ed Schofield are experts in pollen and non-pollen palynomorph analysis and have undertaken research in the UK and further afield. Their research focuses upon reconstructing past environments to examine the impact of human activity and climate change. Dmitri Mauquoy uses plant macrofossils to reconstruct climate changes from peatlands. Dmitri Mauquoy is currently working on understanding peatland carbon accumulation, which includes looking at disturbance from fires.

Graeme Swindles is a palaeo– and neo-ecologist and Earth System Scientist with expertise in peatland ecohydrology, peatland responses to climate change and testate amoebae as bioindicators. He also has expertise in the use of statistical and modelling approaches for palaeo-environmental reconstruction.  Gill Plunkett is a palaeoecologist with a specific interest in understanding human-environment interactions in the past. Gill has worked on Irish prehistoric and Medieval sites and has experience of wetland archaeology survey and recording. Her palaeoecological expertise includes palynology and plant macrofossil analysis (peatland and archaeobotanical), as well as the application of tephrochronology as both a dating and correlation method and a means of examining volcanic impacts on climate and society.

Year 1: (a) Conduct a literature review and draft out a methodology chapter; (b) health and safety training in the field and laboratory; (c) undertake fieldwork to collect samples (either in Ireland or Scotland); (d) submit range-finder AMS radiocarbon dates to determine the timescale of the sedimentary archives (e) commence the macro and microfossil preparation; (f) undertake identification training for NPPs and plant macrofossils; (f) Start the analysis of the cores: description and sub-sampling, sample preparation, and data collection.

Year 2: (a) Continue the data collection in the laboratory which will take most of the year; (b) Complete the core collection;  (c) Obtain further radiocarbon dates for new and completed cores; (d) undertake training for testate amoebae; (e) Analyse samples for FTIR at the University of Santiago de Compostela, Spain (TM has well established research collaborations with colleagues at USC and it will be free of charge); (f) undertake preliminary data analysis including statistics; (g) Attend a conference and present a poster or paper;  (h) Start drafting an introduction and results chapter (in the form by academic papers); (i) Submit a peer reviewed paper(s) in a suitable academic journal(s) (e.g., The Holocene or Review of Palaeobotany and Palynology).

Year 3: (a) Continue with the data collection and analysis until six months before completion; (b) Obtain any further radiocarbon dates; (c) Focus on writing the remaining write up (discussion and conclusion if traditional pathway is followed or the remaining manuscripts for a journal(s) with the aim of producing at least four papers).