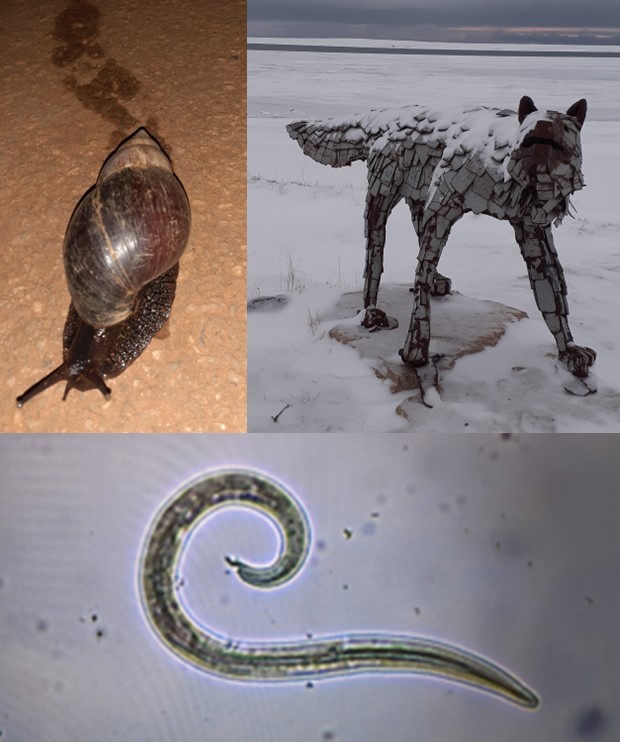 Recent decades have seen big changes in the distribution and epidemiology of lungworms and their importance as pathogens in wildlife systems: notably, Angiostrongylus vasorum in foxes in Europe, Angiostrongylus cantonensis in rats and people in the sub-tropics, Crenosoma striatum in hedgehogs, and various species in ungulates in the thawing north. These systems all involve gastropod mollusc intermediate hosts, and often additional animal species as paratenic (transport) hosts, so transmission occurs through trophic networks. Connections within these networks are likely to be affected by climate change, yet they have been neglected relative to direct effects of climate on parasite development.

This project will explore the importance of host behaviour to the transmission of gastropod-borne nematodes under climate change, for selected systems and in relation to trophic interactions. Research questions could include:

To address these questions, parallel approaches will be taken, involving experimental, field and modelling work. Captive gastropods will be exposed to controlled conditions and their behaviour evaluated in relation to transmission-relevant outcomes such as diet and microclimate selection. Parasite detection methods will be developed for rapid and affordable detection across food chains: this will include harvesting of reference and comparator material by dissecting wild hosts (e.g. from wildlife rehabilitation centres and, for tropical species, wet markets). Laboratory work will apply molecular methods including portable PCR and sequencing systems. Modelling will be used to compare parasite distribution, abundance and seasonality with and without taking into account these modifying factors, and to project likely responses under climate change scenarios.

Because several different parasite-host systems and methodological approaches are possible, the direction of the project can be adapted to the interests, abilities and training needs of the successful candidate. In the first year, they will: (i) produce global parasite distribution maps for the best-known species and identify where macroclimate alone cannot explain present range; (ii) conduct at least one experiment on the gastropod colony to determine climate responsiveness of a transmission-relevant behaviour; and (iii) collect reference parasite material and trial molecular versus traditional methods for detection of a selected metastrongylid species in transport hosts. Thereafter, the student will have freedom to develop the project according to their interests and taking advantage of the research group’s excellent facilities and global connections.

Essential: A background in biological sciences and interest in parasites and epidemiology

The project will take advantage of the following facilities and links:

The emergence of disease under climate change is a topical issue and increasingly affects wildlife, domestic animals and people. Outcomes will enhance understanding of the processes driving parasitic disease emergence in natural systems, including range expansion and altered infection pressure, and the role of climate and other environmental change in that. This will add to the ability of society to mitigate undesirable consequences for One Health, including the viability of threatened species. Impacts of lungworms on natural hosts have been documented and can be substantial. More specifically, project outcomes will document and analyse the factors driving the emergence of lungworm species and open the way to strategies to protect animal and human health.

The timetable is set out in the project description. The three first year projects are feasible as they build on existing set-ups and expertise: modelling will utilise software packages already in use in the lab that have been partially configured for the target species; molecular methods are already in use for other systems; and similar experiments have been done in our captive snail colony. Nevertheless the results will be new and potentially publishable as PhD chapters with further work. By conducting work using modelling, experimental and field methods, the student will receive training in those areas in a more controlled environment, developing skills and opening their eyes to what is possible as well as to what they enjoy most. The integration of experimental, field and modelling methods is core to our lab outlook and to needs in disease ecology moving forward and it is important that the students sample and truly experience those areas despite preconceptions coming into the PhD. Following this first year activity, the student will be much better placed to drive the research in a direction they feel competent in and passionate about.

A partnership with the European Scientific Counsel for Companion Animal Parasites is currently under discussion. An update will be provided in due course.