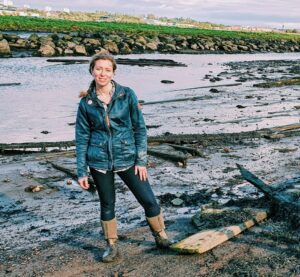 Ellie Graham is an archaeologist and PhD student at the University of Aberdeen in Scotland. She previously worked in commercial archaeology and most recently with the SCAPE Trust (Scottish Coastal Archaeology and the Problem of Erosion) carrying out research on eroding coastal sites and working with local communities.

The climate crisis is manifesting ever more visibly and dramatically. The year 2022 was notable for all the wrong reasons, continuing a trend of global heating, with the past eight years now the eight warmest on record. In addition to incremental changes, there has been a plethora of extreme events globally, including flooding, extreme heatwaves, and raging wildfires (World Meteorological Organization, 2023). Urgent mitigation action to reduce emissions can limit warming to around 1.5 degrees. However, some effects are locked in, including sea level rise, so coastal areas will experience climate-driven impacts, including accelerated erosion and increased coastal flooding. Scotland’s national assessment of coastal change, Dynamic Coast, has studied the soft coast, which makes up 19% of Scotland’s coastline and shown that more of the coast will experience erosion, at an accelerated rate under all emissions scenarios (Dynamic Coast, 2021).

The coast is a focal point of modern settlement, economic activity and amenity value, but it is also rich in heritage value. For many of the same reasons that it is densely occupied today, the coast has been attractive throughout the period of human occupation. This is especially true in countries like Scotland, with clusters of island groups and hinterland terrain that is often mountainous and inhospitable. By comparison the best agricultural land is located at the coast, along with other attributes like defensibility, opportunities for exchange, trade and travel over water, and access to marine resources. This has left a rich legacy of heritage sites along our coastlines, but this is threatened by the impacts of modern climate change. For example, the iconic prehistoric village of Skara Brae in Orkney was exposed at the coast in a storm of 1850 and its vulnerability to ongoing erosion and modern climate threat is such that it is now protected by a sea wall. Hundreds more archaeologically significant sites around the Scottish coast are threatened. A recent project run by the SCAPE Trust, Scotland’s Coastal Heritage at Risk (SCHARP) worked with volunteers from local coastal communities to monitor eroding sites and update records, and highlighted the 145 most vulnerable, important, and locally-valued sites, many of which have never been investigated, and are not understood but which are being lost to the sea (Hambly, 2017a; SCAPE, 2022).

History and archaeology are important to local people, contribute to the sense of place and local identity. Collectively, sites tell the story of thousands of years of human activity in the landscape and offer a tangible connection to the past. Heritage sites, of which Skara Brae is one of the most famous examples, attract tourists from around the globe, contributing to the local economy. However, they offer even more. The scientific information contained in archaeological sites are archives of long-term environmental data and palaeoclimate records. This can not only tell us about past environmental conditions and landscapes which people occupied, but can also identify past changes, both gradual trends and abrupt change. The unique contribution of archaeological sites to palaeoenvironmental studies is the high-resolution chronology offered by archaeological information, and the precision this allows. By adding a human dimension to the data, they also allow us to identify the impacts of such changes on societies, and to pinpoint past societal responses to these changes. Archaeological sites can therefore not only tell us about past climate change and how it affected the people who experienced it, but the information they contain can inform modern adaptation strategies. However, these valuable places and the data they hold are vulnerable to the very processes to which they bear testimony.

There is a longstanding principal in archaeology of preservation in situ, i.e. sites are best left undisturbed in the ground (Council of Europe, 1992). This stance advocates that as excavation is a process of destruction, it should be avoided where possible, except where it’s justified by significant research interest or necessitated by threat such as development. Most archaeological fieldwork in the UK is undertaken as developer-funded work to mitigate destruction of a site, excavating and recording a site to achieve preservation by record. However, where natural processes are the cause of destruction, there is no similar mechanism to fund investigation of sites that are being lost – even though anthropogenic climate change is accelerating the processes. There are increasing calls internationally to treat sites being impacted by climate-driven loss as a form of rescue archaeology (Hambrecht et al., 2020; Hollesen et al., 2018) and such is the scale of loss of sites and information that this issue has been framed as multiple burning libraries of Alexandria (McGovern, 2018). The threat is becoming more urgent. With so much at risk, and with growing acceptance that we can’t preserve everything, the archaeological sector is developing systems to assess vulnerability, evaluate risk and prioritise sites for rescue work.

Various frameworks have been developed. In Scotland, we are lucky to have a high quality of baseline information to work with. Dynamic Coast shows the national picture for erosion risk (Dynamic Coast, 2021). Historic Environment Scotland have led on the climate change threat to heritage sites, carrying out a risk assessment for the properties they manage on behalf of the nation (Historic Environment Scotland, 2018). A climate vulnerability assessment for the Heart of Neolithic Orkney World Heritage Site, which includes Skara Brae and highlights the threat from coastal erosion, was the first application of the Climate Vulnerability Index tool to a cultural world heritage site (Day et al., 2019). Records of coastal archaeological sites were collected by a programme of coastal surveys around Scotland. These were checked and ground-truthed by volunteers as part of SCHARP, providing observation data to provide a snapshot of the condition of Scotland’s coastal archaeological resource and highlighting just how much is at risk (Hambly, 2017b, 2017a). However, these sites need to be regularly monitored, and their future vulnerability to climate change assessed. The value of coastal monitoring and importance of gathering high-resolution information on the condition of the coast edge has also been highlighted by Dynamic Coast.

Current research being undertaken as part of my PhD project is working to fill these gaps and provide this monitoring data. I’m exploring the potential of drone technology to gather survey information and record sites as the basis of refined scale vulnerability assessments for archaeological sites. The aim is to resolve the scalar differences between coarse-resolution coastal change assessment and local scale impacts and site needs. Researchers around the world emphasise the importance of recent, high-resolution, short time interval data. I’m working on a network of sites around the Scottish coast which have been identified as archaeologically significant, under threat and important to local communities. Low-level drone photography records the site in detail, and the images can then be used to build accurate digital 3D landscape models using a technique called Structure from Motion. This not only provides preservation by record of the site and its current condition, but can be used to map the current coast edge as the basis for erosion assessment. In a GIS project, the current coastline is then compared to its past position as depicted on historic maps, aerial photography and other records, and change analysed using the Digital Shoreline Analysis System (Himmelstoss et al., 2021) which casts a series of perpendicular transects spaced along this series of coastlines and calculates statistics on the rate and extent of change.

One case study, on a sheltered, southeast-facing bay on the Shetland mainland, Channerwick Bay, was selected as a site of high archaeological significance. A community excavation carried out in 2015 by the SCAPE Trust and Archaeology Shetland (SCAPE, 2018) investigated the foundations and lowest floor of a broch, a fortified Iron Age tower unique to north and west Scotland. One side of the massive circular wall, and the upper part of the walls had been robbed in antiquity, and much of the stone used to build a 18th-19th century township. The structure was exposed in the eroding coast edge by a series of storms in the winter of 2013-14, and the township buildings were themselves damaged, with one corner of the chapel building breached by the retreating coast edge. Coastal change assessment showed a long-term erosion trend here, but also highlighted that the archaeological sites are on the most susceptible stretch of coastline in the bay. This also demonstrated the temporal and spatial complexity of erosion, while the drone data allowed examination of short time intervals, revealing new information about the patterns of coastal change. Comparison with meteorological records for the past 20 years also allowed the specific episodes of erosion to be related to particular events and storm conditions. This can be used to assess the likely impact of future storm events on this and other similar stretches of coast to provide an early warning of possible loss.

Similar survey and assessment methods, along with some small-scale investigative work will be applied to other sites of archaeological significance around Scotland (Graham, 2022). Sites are selected in partnership with local communities, and volunteers are involved in the fieldwork, to integrate local knowledge and social value into site assessment. Further, recording the impacts of climate change on locally-valued places can contribute to climate literacy, help to engage the public with the issue and engender climate action. The survey results will not only provide information about the sites themselves but also turn them into a network of locations where the impacts and patterns of coastal erosion are closely observed and understood. This will inform understanding of coastal vulnerability and help archaeologists to prioritise sites for action and plan future investigative work on these valuable but vulnerable places to mitigate the impacts of climate-driven loss.

Hambly, J. (2017a). A review of heritage at risk from coastal processes in Scotland: Results from the Scotland’s Coastal Heritage at Risk Project 2012-2016. https://scapetrust.org/wp-content/uploads/reports/SCHARP-CoastalHeritage-REVIEW.pdf