Climate Change: Why Facts Are Not Enough 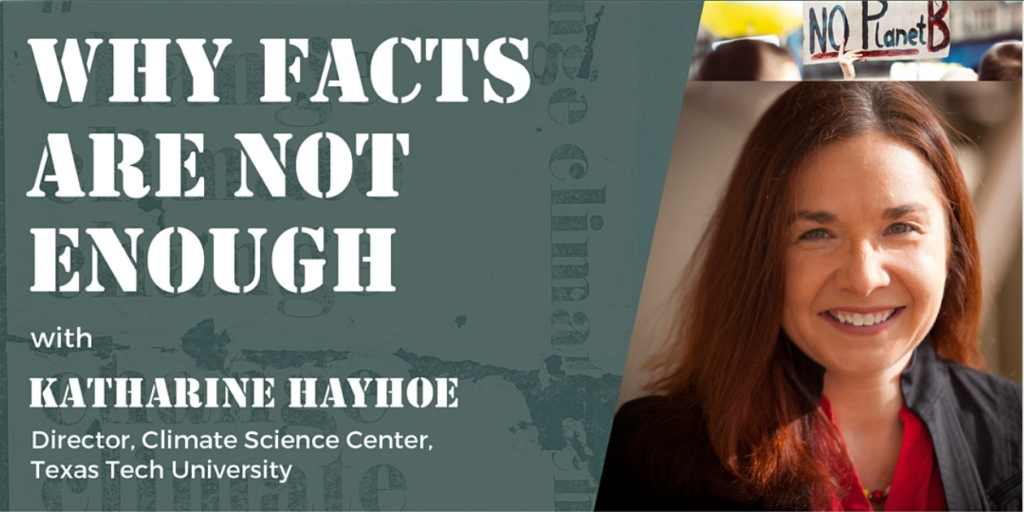 Scientist Katharine Hayhoe untangles the science behind global warming, and the roles our values play in shaping the conversation.

When we hear people objecting to climate change, they often use science-y or even religious-y sounding arguments. “It’s just a natural cycle,” some say, or “God is in control, so humans can’t affect something as big as our planet.” Yet if the conversation continues a few minutes longer, it rapidly becomes apparent that the real objections have nothing to do with lack of information or knowledge or belief. Our attitudes towards climate change are primarily the result of where we fall on the political spectrum, and our corresponding aversion to what we perceive to be the only solution: allowing the government to destroy the economy, impose unfair regulations, and rob us of our personal liberties.

Is there solid evidence that climate is changing and humans are responsible? Are there solutions that are economically viable and appealing across the political spectrum? And why would any of us even care? Join Katharine Hayhoe as she untangles the complex science behind global warming and highlights the key role our values can play in shaping our conversations on this crucial topic.

Katharine Hayhoe is an accomplished atmospheric scientist who studies climate change and why it matters to us here and now. She is also a remarkable communicator who has received the American Geophysical Union’s climate communication prize, the Stephen Schneider Climate Communication award, and been named to a number of lists including Time Magazine’s 100 Most Influential People, Foreign Policy’s 100 Leading Thinkers, and FORTUNE magazine’s World’s Greatest Leaders.

Katharine has served as lead author on the Second, Third, and Fourth National Climate Assessments. She also hosts and produces the PBS Digital Series, Global Weirding, and serves on advisory committees for a broad range of organizations including the Smithsonian Natural History Museum, the Earth Science Women’s Network, and the American Association for the Advancement of Science.

This event is hosted by the Church of Ireland & Methodist Chaplaincy at Queen’s in partnership with Queen’s Religious Studies Research Forum.

Since 1957, the Annual Theological Lectures at Queen’s have sought to foster dialogue between theology and cutting edge issues in the public square. Sponsored by the Church of Ireland Board of Education, this year’s lecture is free to attend.