An Aberdeen University seismologist has discovered that noise levels across the city have plummeted by 60% since lockdown started.

David Cornwell has used data recorded by a “citizen seismometer” in the Department of Geology & Geophysics office of his colleague Dave Healy on the King’s College campus and worked with Dr Thomas Lecocq of the Royal Observatory of Belgium to investigate the dramatic fall-off in human noise since the public was told to avoid travelling to work, unless in exceptional circumstances. 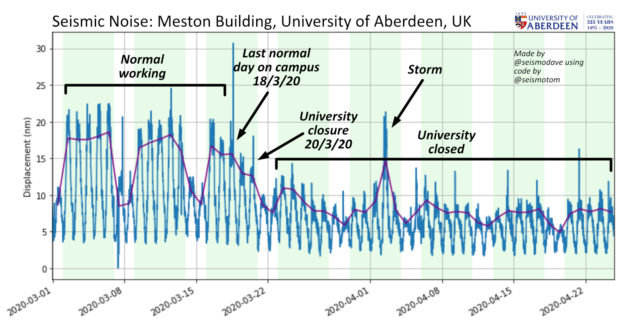 Mr Cornwell said the findings had provided evidence of the reduction in man-made noise since the closure of universities, schools, council offices, sports grounds, pubs, restaurants and other public buildings across the city.

He added: “We took the data from a typical work day, such as March 16, and compared it with the findings from March 30, once the lockdown had been implemented for more than a week.

“It shows the reduction of factors such as construction, vehicles on the roads, helicopters flying out to the North Sea, and a similar fall in the number of aeroplanes, trains and other forms of commuter traffic.

“It has been very noticeable on campus, but the whole world is experiencing a reduction in noise levels and this has happened in the space of just one month.”

In a link with another ongoing COVID-19 research project at Aberdeen University, Mr Cornwell has converted the vibrations to sound and added them to Professor Pete Stollery’s soundmap project (www.tinyurl.com/covid19soundmap), which is also being conducted in the Granite City.

By increasing the measured seismic noise frequencies by a factor of 100, it is possible to hear the difference in Earth’s vibrations over an entire day in a few minutes.

Mr Cornwell said the study demonstrated that people were adhering to the new restrictions and adapting to the “new normal.” 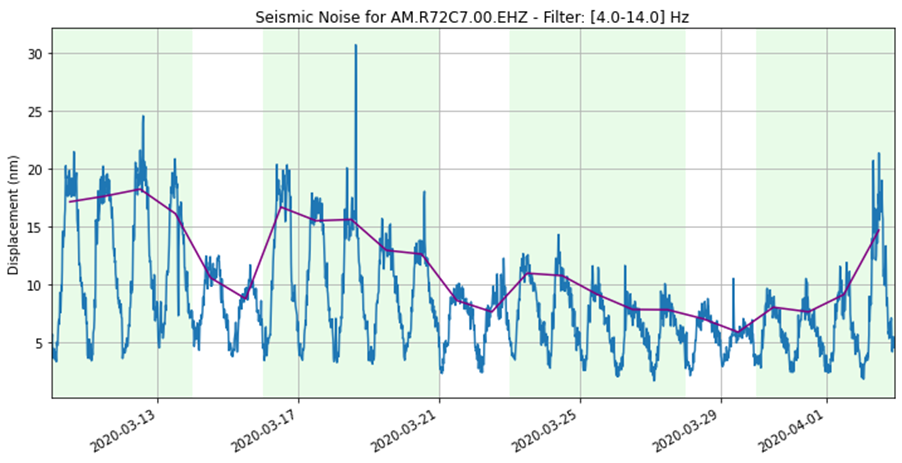 He added: “Being able to download open-access data and construct plots like this backs up the news reports that the public are following the guidelines.

“Other seismologists have noticed increased noise levels during the day in residential areas, which again shows that people are remaining at home.

“This is an unprecedented time with managed public restrictions across the world, so being able to record recent lockdown events, and future ‘un-lockdown’ events, using seismological data is an interesting side-story to the main news and has brought together professional and public enthusiast seismologists.”