Can pollen in peat paint a picture of Neolithic Shetland? 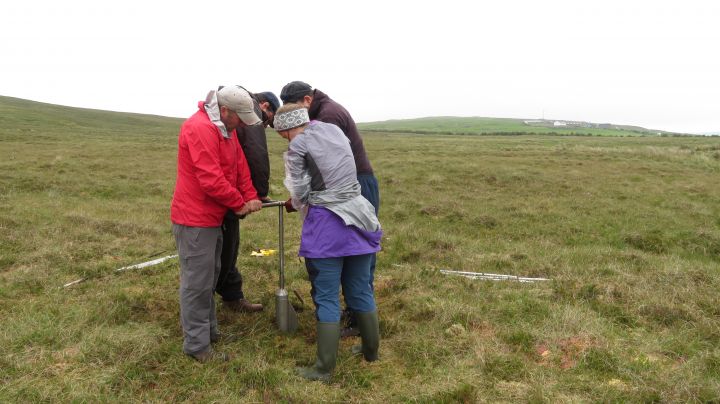 A RESEARCH project is hoping to get a glimpse into what Neolithic Shetland may have looked like by studying pollen found in peat.

The aim is to try to paint a picture of what the environment was like in the Neolithic era thousands of years ago.

PhD student Hazel Mosley from Queen’s University Belfast made the trip to Shetland earlier this month alongside supervisors and another palaeoecologist to take peat samples in Northmavine.

It looks to follow on from work done through the previous North Roe felsite project, which looked at the production of stone tools.

“The earliest dates we have for Neolithic activity in Shetland come from West Voe, around 3700 BC, and within a hundred years of this we know they were up on North Roe mining felsite and making polished axes and Shetland knives,” she said.

“These felsite objects are so characteristic of Neolithic Shetland and we have almost no evidence of them being used elsewhere, but we don’t know very much about what the landscape was like at this time, especially around Northmavine, where the felsite was being mined.

“The current project is aiming to provide an environmental context for the work done by the North Roe Felsite Project, through palaeoecology, which is really just what it sounds like – ecology of the past.

“By identifying the pollen preserved in the peat we can get an idea of what kind of vegetation was present, and infer something about the environmental conditions.

“By looking for fungal spores that grow on animal droppings we can see indications of grazing animals; we can also look for changes that humans have made to the environment – growing cereals, cutting down trees.”

Earlier this month the team located deep peat in Northmavine and used a Russian corer to take samples.

It was safely packaged up for its trip back to Belfast.

The priority now is to date the start of the peat formation, which will be done through radiocarbon dating – and only then will the researches know if they have been successful in tracking down Neolithic pollen.

“At the moment Shetland is famously short of trees but there is evidence that during the Neolithic, in some places at least, there were patches of woodland,” Mosley added.

“The landscape of Northmavine is today quite different from more low-lying areas of Shetland; as this is partly due to the unique geology, the elevation and the exposure it is likely that during the Neolithic it was also quite open, but summer temperatures, at least in in early Neolithic, were a little warmer than today.

“Were there patches of scrub or woodland in the sheltered areas? Did humans change the landscape as they started using it more intensively? If so, when and how quickly did these changes occur? At the moment we just don’t know, but this is what the project is trying to find out.”

She said the team will also look at previous palaeoecological work in other parts of Shetland and trying to pull it all together to get an idea of regional differences in vegetation throughout the Neolithic period.

“Everyone we’ve spoken to so far has been really helpful, pointing out areas of deep peat that we might be interested in,” Mosley said.

“We are also hoping to do some work with Dr Val Turner at the Shetland Amenity Trust to support the Shetland Geopark, and will, Covid restrictions permitting, be back in the autumn to collect more cores.”