Hooded capuchin monkey at higher risk of extinction than realised 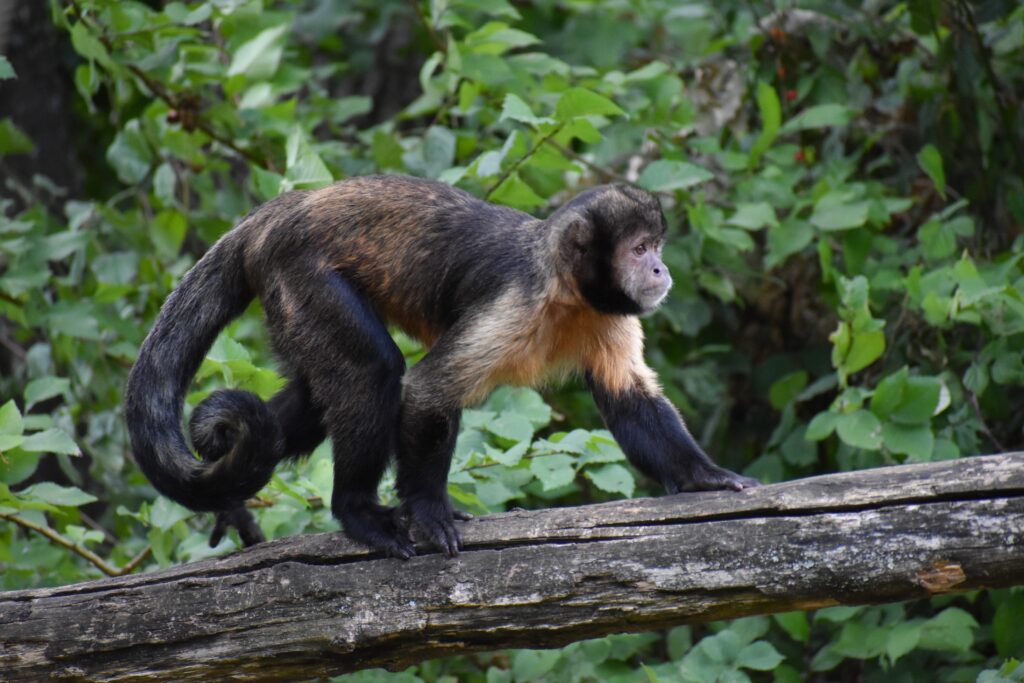 The hooded capuchin monkey has been identified as being at a higher risk of extinction than scientists previously realised following University of Aberdeen and Fundación Para La Tierra research in Paraguay.

Published in Ecological Solutions and Evidence the study carried out by Dr Rebecca Smith calls for the national reassessment of the International Union for Conservation of Nature (IUCN) Red List of Threatened Species for the monkeys. The study is also the first study in an international ecological journal with the abstract to be published in Guaraní, one of Paraguay’s official languages.

Dr Smith completed her PhD with the University of Aberdeen while working for an NGO (Fundación Para La Tierra) in Paraguay. In Paraguay, the drastic forest loss over the last 60 years has not occurred through gradual degradation and fragmentation of intact forests but rather by widescale clear cutting and complete transformation to crop fields.

Dr Smith is now implementing an agroforestry reforestation programme with the communities with whom she has worked for the last five years to try to combat the massive deforestation trends in the region with a solution which can contribute to the livelihoods of the people living with the capuchins as well as the creature’s survival.

She explains: “This research provided the first detailed information on the ecology of this species in Paraguay. Understanding its ecological needs has allowed us to develop a conservation action plan for the Atlantic Forest in Paraguay (using the capuchin as the flagship species) that will have benefits for the forest, wildlife and the people who live in the area.”

Funded by Fundación Para La Tierra, a grant from the National Geographic Society and support from an Elphinstone Scholarship the research was carried out in the Paraguayan Upper Paraná Atlantic Forest (BAAPA), one of the world’s most critically endangered terrestrial habitats with more than 90% of its original cover lost to industrial agriculture. The research proposes that combining native tree corridor with shade grown yerba mate – a native Atlantic Forest plant that makes a very popular tea in South America – and slash pine plantations would create habitat for the capuchin and other wildlife while helping to alleviate poverty in the area and the pressure that this causes on the forest’s natural resources.

Dr Smith added: “We looked at remotely sensed microhabitat features that were associated with habitat suitability in forests that had experienced different levels of degradation to determine how hooded capuchin distribution is associated with these features in Atlantic Forest fragments.

“A remotely-sensed habitat feature called “Wetness”, a measure of soil moisture and canopy closure, was found to be the most important driver of capuchin presence at both the highly degraded (Rancho Laguna Blanca) and undisturbed (Nueva Gambach) sites. The capuchins showed a preference for more mature forest, bamboo dominated forest and flooded forest (that has experienced little selective logging in the past).

“While the hooded capuchin is an adaptable species, the extreme level of complete forest loss in Paraguay may pose a threat to their long-term survival as forest fragments are likely disconnected for the species. The increasing pressure on Paraguay’s little remaining forest from illegal logging, marijuana plantations, charcoal production and illegal settlements may result in an increase in degraded fragments where there is too little forest in a mature enough condition to support viable populations of capuchins.

“Though this species is currently classified as Least Concern at a national and global level, its dependence on forest in an area where forests are clear cut to make way for soy fields means that this status must be re-evaluated. This demonstrates that though a species may appear to be doing well – this capuchin is believed to be common, adaptable and widespread – that there may be unseen consequences of forest loss and degradation on their ability to survive long-term.”

Photo by Adèle on Unsplash