North-East culture to be celebrated in Stories of Aberdeenshire 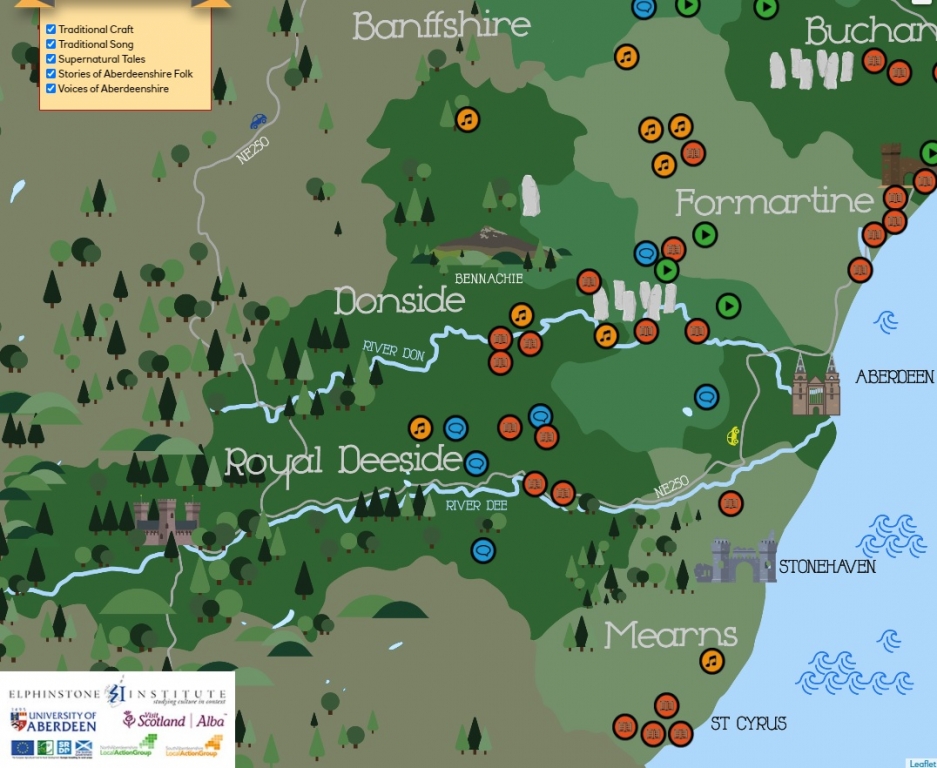 An interactive map is available at www.abdn.ac.uk/elphinstone/map/

The University’s Elphinstone Institute has jointly led a new campaign shining a spotlight on Aberdeenshire’s folklore, ballads, supernatural tales and crafts which has been launched today (14 September).

The Stories of Aberdeenshire project celebrates the region’s rich cultural heritage and highlights how local language, story and song have shaped – and continue to shape – the North-East.

Funded by North and South Aberdeenshire LEADER and delivered in partnership with the University of Aberdeen’s Elphinstone Institute and VisitScotland, the campaign aims to capture the abundance of cultural heritage that makes the region a must-visit destination.

New marketing assets, featuring the region’s rich Doric language and folklore, have been created to provide a helpful resource for further exploration of the area’s heritage and culture.

The abundance of stories gathered from locations across the region have been condensed into three key themes:

To bring the authentic stories of North-East lives and legends to life for both locals and visitors, a series of six short films, two e-books, and an interactive map, which includes audio recordings about folklore in the North-East, have been produced.

A social media campaign targeting visitors in Scotland has also been launched on Elphinstone Institute’s Instagram and Facebook platforms, with a call to action which encourages them to plan a visit to the region and also share the hashtag #StoriesofAberdeenshire with any relevant images.

As part of the campaign, a series of six promotional films has been created – which will be hosted on the University of Aberdeen’s YouTube channel – as well as a wide range of new imagery which captures different aspects of Aberdeenshire’s diverse cultural heritage. The wealth of stories that can be shared with visitors will showcase the unique nature of the region and capture their imaginations.

The films will immerse viewers in three different aspects of local culture – traditional crafts (leather, lace, straw and quilting); balladry and local songs; and the story of the importance of the North-East to Bram Stoker and how it influenced his work.*

These videos tell the tale of how Aberdeenshire has nurtured and influenced crafts, song and literature – told through the eyes of those who are most passionate about their native land or adoptive home.

A new blog www.visitscotland.com/storiesofaberdeenshire has been created to complement the campaign activity and for those looking to share a more in-depth view of Aberdeenshire’s cultural heritage, a collection of articles exploring folklore around the region can be found here https://www.abdn.ac.uk/elphinstone/map/ The map also contains audio files, allowing visitors to hear examples of the region’s native Doric tongue – a rich dialect of the Scots language.

There is also an e-book celebrating some of the North-East’s characters, including The Real Macbeth and his tragic end at Lumphanan; famous strong man Donald Dinnie; and Philip Kennedy, smuggler and folk hero. The supernatural e-book provides more detail about how Slains Castle influenced Bram Stoker’s Dracula, and many other mystical tales involving witches, ghosts, cannibals and a kelpie.

Jo Robinson, VisitScotland Regional Director, said: “I am thrilled that we are able to tell the stories of Aberdeenshire’s amazing cultural heritage in this way.

“This project shines a real spotlight on the people, customs, songs and ballads, folklore and traditional crafts, born and developed in this region and shares them with the rest of the world.

“These assets really help demonstrate why Aberdeenshire’s fascinating stories and traditions make it a must-visit destination.”

Dr Thomas A McKean, Director, Elphinstone Institute, said: “The North-East is home to an extraordinary range of living cultural traditions. Shaped by the past but uniquely contemporary, these compelling stories, songs and craft skills offer an exciting way to connect with others and to share experiences that are now more important than ever.”

Dr Fiona-Jane Brown, Project Coordinator for Elphinstone Institute said: “I feel very privileged to share some of the stories and traditional culture from our area, provided by very enthusiastic people from Banff to St Cyrus and all points in between. The resulting material from this project will benefit the smaller places at a time tourism needs a kickstart and will encourage locals to learn more about where they live.”

* The information in this film is largely based on the book ‘When Brave Men Shudder: The Scottish Origins of Dracula’ by Mike Shepherd.