Portrait of Aberdeen academic shines light on academics at risk 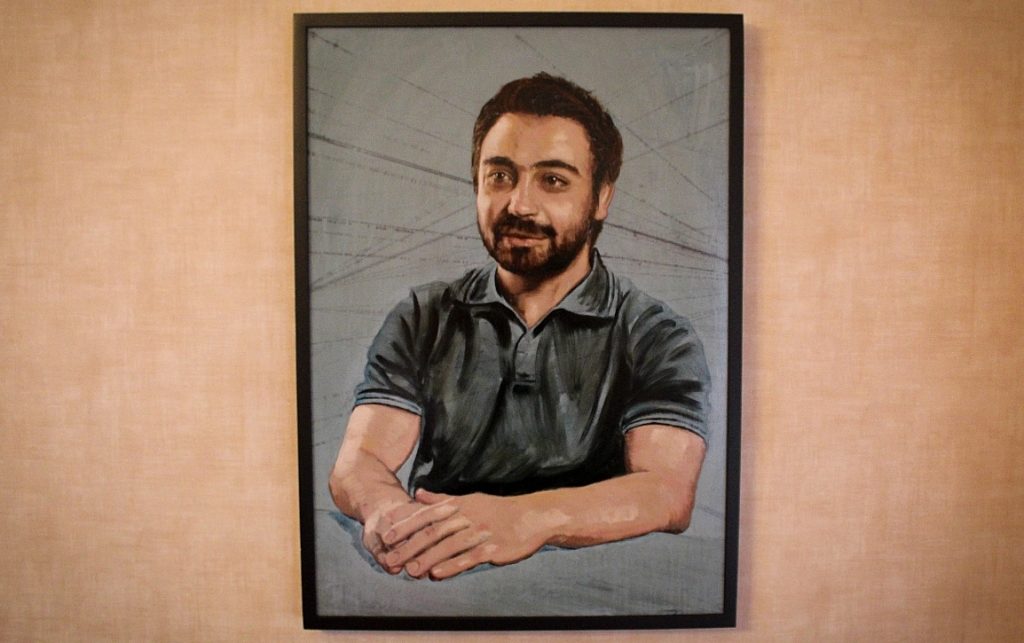 An academic who travelled to Aberdeen after being forced to flee war-torn Syria features in a new exhibition showcasing work to support scholars whose work puts their lives in danger.

A portrait of Aberdeen PhD candidate Mohamed Zaher Al Bakour is included in an exhibition organised by the Royal Society of Edinburgh (RSE) and running in the Society’s George Street premises throughout August.

Zaher, 27, was one of three academic refugees who sat for Glasgow-based portrait painter I.D Campbell to raise the profile of schemes which provide support to those at risk.

He came to Aberdeen through the Council for At-Risk Academics (Cara) after being exiled from his home city of Aleppo.

Cara is a British organisation set up in the 1930s to protect academics and scientists from persecution, violence and conflict.  In partnership with universities and other organisations, it offers them practical and financial help, and assistance to reach a place where they can continue their work in safety.

Zaher, who studies biomedical science, is a RSE Young Academy of Scotland Member through the Academy’s At Risk Academic Refugees (ARAR) initiative.  He arrived in Aberdeen through a scholarship supporting refugee students who chose to come to the UK, and received funding from Cara to support his postgraduate studies.

Zaher admitted that his selection to feature in the RSE exhibition came as a huge surprise, but one that he is grateful for.

“I am very happy to be featured in a country that has welcomed me with open arms and has given me the chance to speak about my life,” he said.

“The help I have received from Cara and the University gave me hope when I had no hope at all, and now Aberdeen has become my home.  I’ve gone from a life full of depression, risk and danger to one of success and achievement, and I am so grateful for all the support.”

Stephen Wordsworth, Cara’s Executive Director, said: “We are delighted to see one of our scholars celebrated in this way.

“Academics who are forced into exile often go through very tough experiences and it is a tribute to Zaher, and to all the others we work with, that so many of them manage to overcome that and build exciting new careers for themselves.  We are proud of them all.”

I've gone from a life full of depression, risk and danger to one of success and achievement, and I am so grateful for all the support"