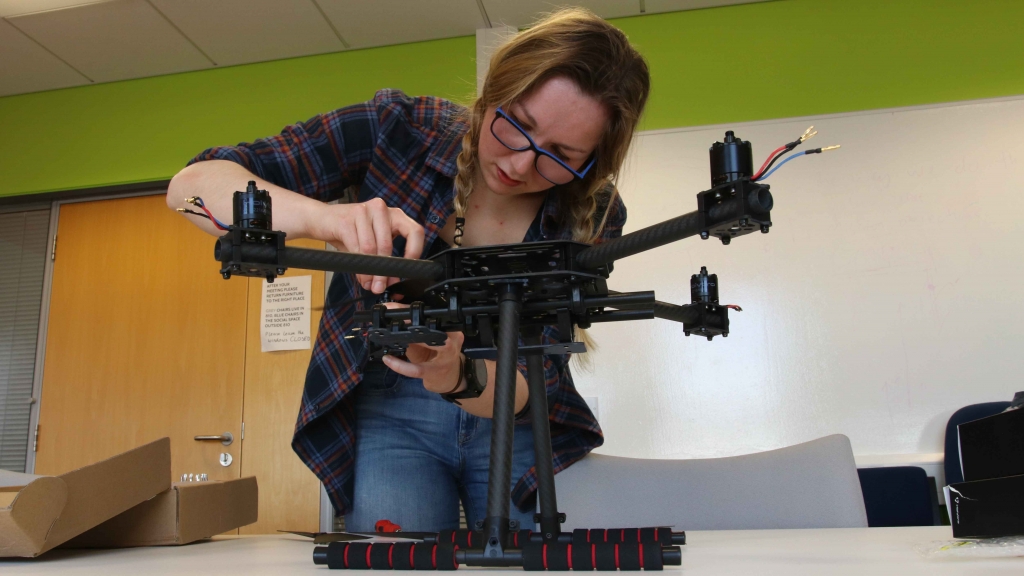 An Aberdeen medical student has built a prototype drone for providing emergency aid to walkers and climbers who suffer a healthcare emergency in Scotland’s hills and mountains.

Sophie Barrack, an outdoors enthusiast, wanted to find out what kind of medical supplies would be most useful in an emergency in a rural location if, in theory, they could be delivered by drone.

She then researched, designed and built a prefabricated drone and intends to test whether it could carry the weight of emergency items.

Sophie sent a survey to volunteers from the Scottish Mountain Rescue, Mountaineering Scotland employees and her network of NHS Healthcare professionals across Scotland to ask their opinions on what items would be most useful in a remote emergency.

When asked what a healthcare drone in Scotland should carry, the top two answers were medication and medical equipment.

Medication could include items such as pain killers, insulin, an EpiPen or fluids.

In Scotland, Search and Rescue Aerial Association Scotland formally joined Scottish Mountain Rescue in 2018. The team use drones in the search for missing persons, but not to deliver equipment or resources.

Drones are already being used to deliver blood for transfusions and some other products in Rwanda and Ghana by US company, Zipline.

In June this year a drone designed by engineers at the University of Southampton was used to fly medical supplies to the Isle of Wight as part of the Covid-19 response.

Sophie’s drone is a more conventional ‘off the shelf’ model. It doesn’t have the necessary range to reach people in remote areas but she hopes to establish whether or not it could carry the necessary weight of medical equipment and still fly accurately in a range of Scottish weather conditions.

Sophie said: “My main interest was in finding out whether healthcare and mountain rescue workers thought a drone could be used to deliver essential medication and equipment in remote areas, which – according to my survey – they do. I then wanted to get a rough idea of a ‘Top 5 things’ that such a drone should have in their opinions.

“The building of the drone was a bit of an afterthought but if nothing else it adds a physical element to the project which can hopefully kickstart discussions, as well as giving us an idea as to how big and powerful a drone would be required.

“Drones have been used to locate missing people in remote areas, so it would be great to explore if they could be used for delivering small amounts of medication or equipment to climbers or walkers in trouble quickly while a mountain rescue team attempts to reach them.  Mountain Rescue and other related services are still absolutely crucial, but if there was a way to get some initial aid to the patient quickly, could that potentially lead to better outcomes? These are the kinds of questions I am interested in.”

Sophie’s lecturer, Dr Heather Morgan, added: “It was really exciting to work with Sophie because we both shared an ambition to take this project beyond the background desk research into existing drones for health around the globe. Being an applied health scientist, and tech enthusiast, I was keen to support Sophie’s desire to explore Scottish opinions through the survey and to act on the results. Creating the prototype was a lot of fun and we’ve already discussed how this project might influence further studies and developments with NHS stakeholders.”