The 2,000-year-old village in Outer Hebrides at risk of falling into the sea 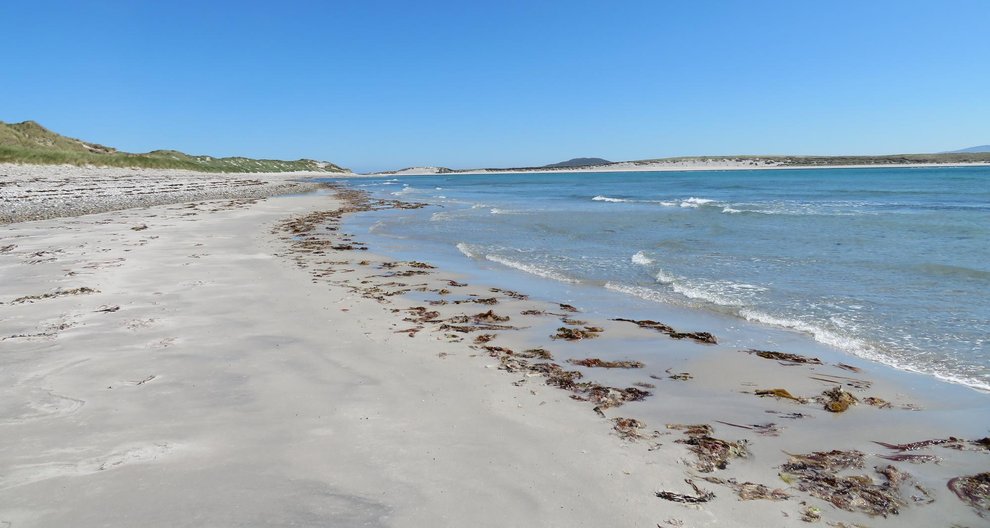 The beach at Baile Sear, a tiny island off North Uist, where the remains of an Iron Age village are at risk of falling into the sea. PIC: Gordon Hatton/geograph.org.

The remains of a 2,000-year-old village in the Outer Hebrides which are at risk of falling into the sea will be surveyed as part of “urgent” work to record the impact of coastal erosion on Scotland’s historic sites.

Baile Sear, a tiny island off North Uist, was home to a significant Iron Age settlement around 25 BC to 380 AD with remains of a number of dwellings exposed by the receding coastline earlier excavated.

The site is now one of around a dozen to be included in a new research project that will look in detail at coastal historic sites at risk from environmental changes and the accelerating effects of climate change.

Baile Sear is considered particularly vulnerable given that, in 2005, a hurricane wiped out 50 metres of land around the prehistoric site, with many archaeological features washed away in the storm.

Elinor Graham, a PhD candidate at Aberdeen University, will use drone technology to examine Baile Sear and, importantly, the remains of the settlement which remain buried for now but are extremely vulnerable to erosion.

Ms Graham said: “We know a huge amount was lost at Baile Sear in a hurricane in a single night. We know there is more there. There is more buried in the hinterland so we will broaden the focus to the landscape and detect remains that are currently buried in order to investigate them before they are lost to the sea.”

Baile Sear was earlier researched by Scottish Coastal Archaeology and the Problem of Erosion (Scape), a trust run by archaeologists at St Andrews University. Two Atlantic roundhouses were excavated with more dwelling thought to exist. Under one house, several pits were found in the floor which contained pottery, burned and unburned bone, and a crucible laid upon a later of white pebbles. Cremation burials may have been held there, it is believed.

The site is now monitored by the local community who track further shifts in the coastal setting.

Scape earlier identified 143 historic sites most at risk from coastal erosion and rising sea levels with Ms Graham now surveying 12 of them in detail.

Other sites include a possible Norse settlement at Whalsies Ayre, East Burra, Shetland where remains of a structure lie half on the beach and half buried on the coast edge.

On the east coast at Boddin Point in Aberdeenshire, an 18th Century lime kiln and slipway which is slowly being lost to the water will also be examined.

At Eyemouth, Kings Mount fort, which was used by the English during the 16th Century Rough Wooing invasion, is also at risk with the cliff on which it stands crumbling away.

Ms Graham, who will be supervised by Professor Gordon Noble, said: “There is a huge resource of important sites that are being lost to the sea along with the valuable scientific information they contain. The work is particularly urgent. There are so many sites that contain information about the past, the people of Scotland and their past environments. So much information is falling into the coastal edge and now we are going to lose much of it altogether. We can’t stop coastal erosion but we can understand these sites before they are lost.”