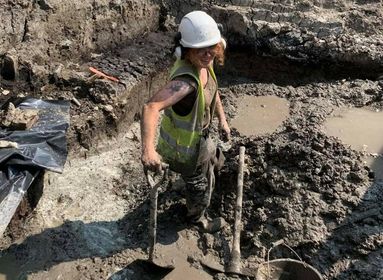 Project: Landscapes of Production: Exploring the Palaeaoenvironmental Context of Stone Tool Quarrying, Manufacture, Use and Deposition on Neolithic Shetland

Research: A distinctive feature of Neolithic Shetland from the early fourth millennium BC was the large scale exploitation of riebeckite felsite, an igneous stone quarried on a large scale in north Mainland and used to manufacture axes, knives and other objects. Recent work (Cooney et al, 2019) has shown these characteristic artefacts and their extraction, manufacture and exchange and use may have had a role in the cultural identity of the people of Neolithic Shetland and formed an integral part of the development of Neolithic society there.

Landscape and palaeoenvironmental environmental data not only provide important contextual information for the stone tool industry but are central to understanding Neolithisation, quarrying and settlement in Shetland, which occurred at a time when tree cover was regionally in decline. High-resolution palaeoecological reconstructions have been done (e.g. at Clickminin: Edwards et al, 2005) but coverage across Shetland is patchy and there is evidence to suggest changes in tree cover could be highly local; questions remain about the spatial variability, timing and mechanisms for environmental change, the role agricultural societies may have had in these changes and how those societies responded to their changing landscape: this is what this PhD will attempt to address.

The project will involve fieldwork in Shetland where new cores will be collected, targeting settlement and quarry sites. We will analyse the cores at high resolution for indicators of environmental change (e.g. variations in pollen, geochemistry and microscopic charcoal) and construct detailed age-model using multiple radiocarbon dates and potentially other chronostratigraphic markers, such as tephra. This will be integrated with existing data from Shetland and beyond in a geospatial database, using GIS to model patterns and timing of deforestation, erosion, landscape openness and expansion of heath and peatland, integrating palaeoecological data with what is known archaeologically about the development of the felsite axe industry, farming and monumentality in Neolithic Shetland.