A day at the Northern Ireland British Trust for Ornithology Conference, November 2019

This year’s Northern Ireland British Trust for Ornithology conference day at the tranquil Lough Neagh Discovery Centre was my first conference as a PhD student and what a fascinating conference it was. I thought it was going to be a relatively small and niche conference as it’s for BTO’s Northern Ireland division and only ran for one day, however I have realised that I am extremely ignorant and was pleasantly surprised by how diverse and widespread the talks were and I now must go through each talk briefly as they were all so interesting (some of the photos aren’t my own and have been obtained from other attendees).

After a quick drive down the M1 on an early Saturday morning, Katherine Booth Jones kicked off the conference with her talk on the 2007/11 Bird Atlas, a citizen science project of a database made up of field surveys mapping birds during the winter and breeding seasons across Britain and Ireland. Based on this huge amount of information available from the atlas they are able to assess the importance of Northern Ireland’s birds in comparison to the rest of the UK and it turns out they are very important!

Lillian Leiber, a post-doc from QUB, was our second talk for the day and presented her research on terns in Strangford Lough. I never really knew much about the research going on in Strangford Lough, I had a vague idea that it was mostly related to the mysterious creatures in the water. However, Lillian pleasantly surprised me by demonstrating how natural and man-made underwater sea structures that are associated with turbulence can promote food availability for plunge-diving seabirds. Very interesting and comparative work for my PhD project as it shows the importance of air currents for foraging and flying! 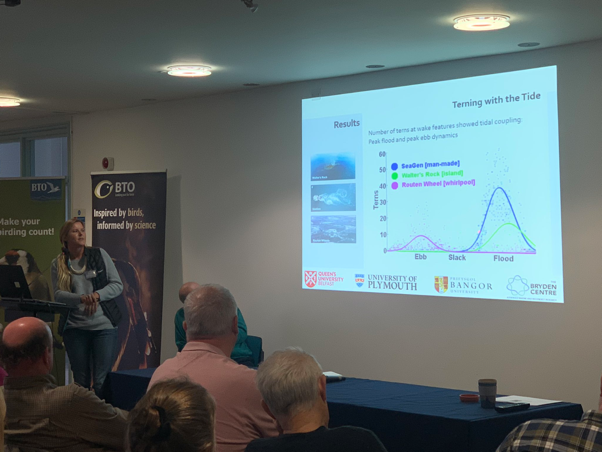 After a refreshing coffee break, Paul Whitelaw and Paul Baker discussed the cross border MarPAMM (Marine Protected Management and Monitoring) project for Northern Ireland, Ireland and Western Scotland. During their talk they showed some fascinating tracking results about the gulls and breeding surveys of storm petrels on Donegal’s islands that are part of the MarPAMM project – this type of data is essential to marine conservation and protected areas as we need to understand where seabirds go, what they do there and why they go to certain places. This is a huge collaborative project involving many organisations, including AFBI in Northern Ireland, Marine Scotland, Scottish Natural Heritage, University College Cork (School of Biological, Earth and Environmental Sciences), Ulster University, BirdWatch Ireland and Scottish Association for Marine Science to name a few! 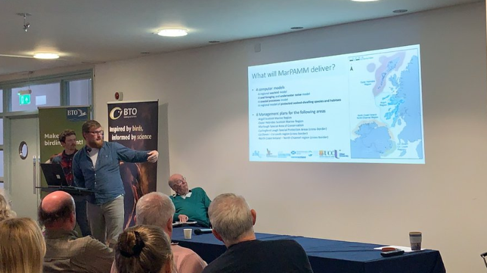 So now that seabirds and song birds have been covered we now move on to raptors! Kez Armstrong, a second year PhD student from QUB, gave a marvel-themed presentation on her current research on the common (or the not so common) kestrel in Northern Ireland. Sadly, Kez told us that similar to what Thanos did in Avengers: Infinity War, the kestrel population has declined by 50% in the UK and Ireland since the 1970s. This news is very concerning as kestrels help maintain a healthy ecosystem by balancing the lower trophic levels. What Kez is trying to do is to find out whether NI’s habitat is suitable for kestrels. It is understood that the main cause of their decline is likely due to decreased habitat and prey availability from changes in land-use practices and therefore they aren’t able to nest and their reproductive success will decline plus some competition between the common buzzard. Kez asks if you think you have recently spotted a kestrel to report it to the NI Raptor Study Group. 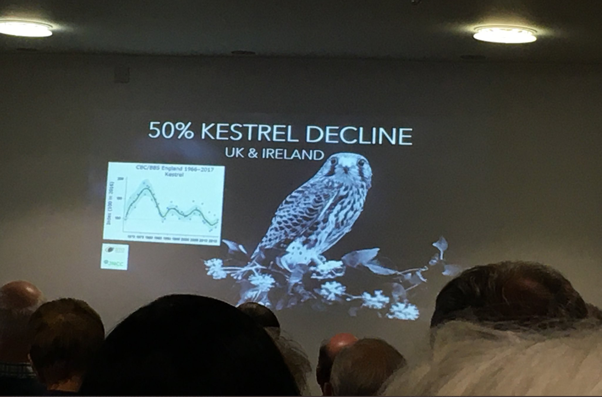 Next up we heard from Rachel Taylor from BTO Cymru in north Wales about curlew tracking. Sadly similar to the common kestrel, the curlew population is declining, but at a much more alarming rate and most of the problems are associated with the breeding season as too few chicks are being reared and their natural habitat is no longer suitable for them to thrive. Rachel used GPS tracking of curlew to gather info on their habitat use, territory and movement on a very fine scale. From this movement data she was able to demonstrate how curlew are selecting within vegetation types but this selection is very patchy and show the different movement patterns during the day vs the night. Rachel’s research suggests that we need to improve the habitat in these areas as the Agri-environment schemes are not working to support curlew on farmland as they depend on grassland for foraging. 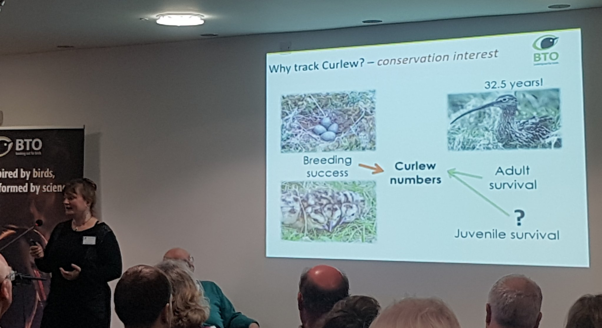 Have you wondered what could be Ireland’s strangest bird? Well James O’Neil, a PhD student from University College Cork, has the answer – the Irish woodcock. The Irish woodcock is a migrant sandpiper however it spends no time on the beach – they are nocturnal and live in forests! James gave an enthusiastic description on woodcocks and rightly so because what I’m about to tell you will blow your mind – first of all, their eyes are behinds its ears, like a hare they have 360 vision, they have a funky walk, and best of all they carry their young on their back in FLIGHT (the chicks literally dangle from their parent like a chain). Sadly, it seems the woodcock’s population is declining, and worse so in Northern Ireland than in Ireland, but there is some seemingly good news as James’ research has indicated that their home range is more widespread than previously thought. 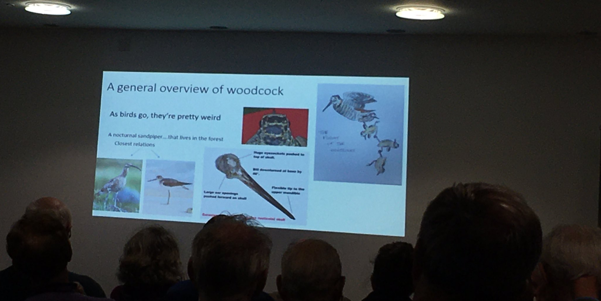 Ok so I lied – we aren’t totally finished with seabirds (yay!)…next up we had Anne-Marie McDevitt from RSPB discussing the importance of biosecurity on islands where breeding seabirds are present with the biosecurity for life project. Invasive mammalian predators such as rats, stoats, mink and feral cats have had devastating impacts on the seabird population as they predate on their defenceless chicks and steal their nutritious eggs. Unfortunately, the presence of invasive mammalian predators is mainly down to the accidental introduction by us as they can sneak onto boats and hide amongst our equipment and baggage. Anne-Marie showed us how to prevent the introduction of invasive mammalian predators by checking our boat, cargo and baggage before and after you arrive on the island. 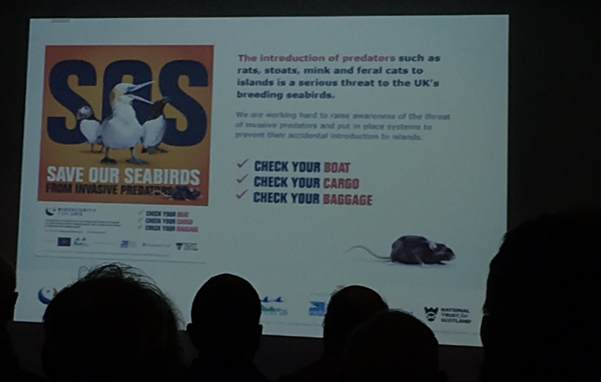 And last but certainly not least we heard from John Clarke, a BTO representative for Derry and the Causeway Coast Ringing Group, presenting his fascinating work on long-eared owls in Coleraine. John told us all about their ecology, including their competition with sparrowhawks and examines their pellets and shows they have a very diverse diet of small mammals and birds – including a sand martin! He also treated us to some adorable photos of the chicks he studies. 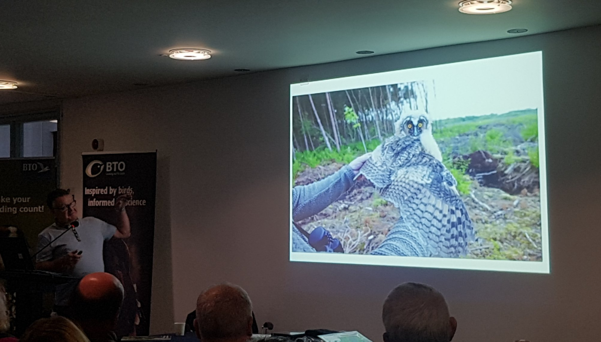 One of the highlights of the day for me was bumping into a fellow seabird enthusiast from BirdWatch Ireland, Paul, who actually took part at the very start of the data collection of the Manx shearwaters on Copeland back in 1953 that my PhD is focused on! Thanks to all the presenters and people who organised this fantastic conference, it was an eye-opening and thought-provoking day. Hopefully I will be able to attend their next conference, learn more about the ornithology research in Ireland and the UK and hear a follow-up about the research I heard at the conference.