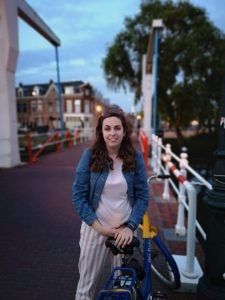 My name is Elise Baas and in October I’m starting a DTP. I did my bachelor’s degree at Queen’s, then moved to Leiden, The Netherlands to do a master’s degree. During my first year in Leiden, I ended up doing a project about invasive species, which I was interested in, and eDNA, which I had never heard of before. I quickly learned that it stood for environmental DNA, and was sent out on my bike to collect water samples from a few lakes in the surrounding area. By the end of the project I had a) logged a serious amount of miles on my bike but also b) a real interest in using eDNA as a monitoring method.

Once I came home, I looked for PhD positions which had any mention of eDNA at all, so I was very glad to see a post come up in Queen’s! My PhD project is called “Harnessing the eDNA in tidal flows to assess marine biodiversity” which is under the supervision of Dr Sarah Helyar and Dr Alex Douglas.